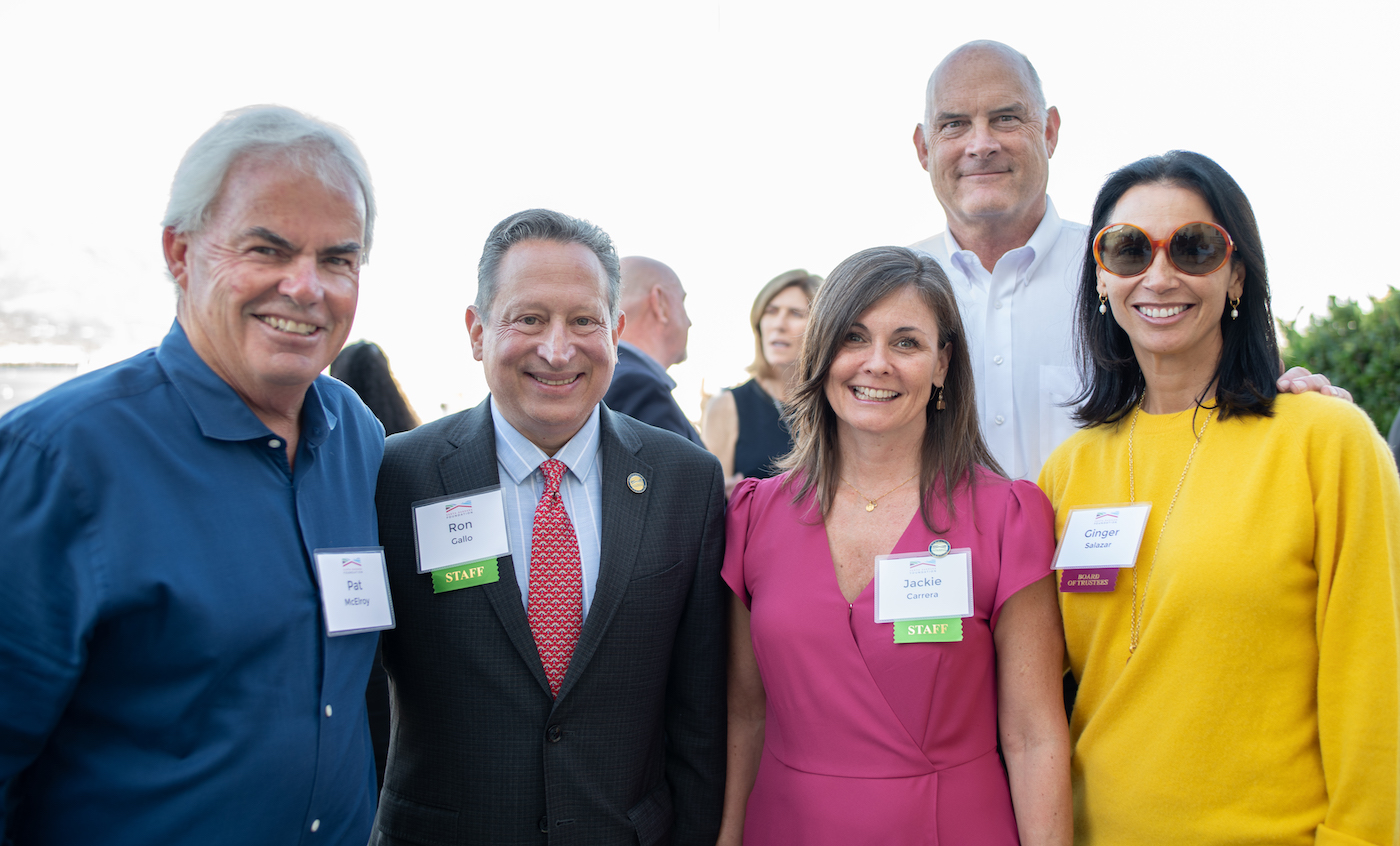 Writing this inaugural issue of The Giving List has entailed speaking with and studying the work of 52 of Santa Barbara’s most important nonprofit organizations. Throughout, I have discerned a vibrant and brave nonprofit community, staring down the crisis we all have behind and before us with purpose and commitment.

At the heart of all this community stands the Santa Barbara Foundation, which in its tenth decade has weathered many storms, emerging as Santa Barbara County’s key convener and catalyst for positive change. A look back into the Foundation’s history and its strategy offer a salve and strength for the uncertain future we face together.

“If there has ever been a question as to the need of the Foundation in Santa Barbara, it would certainly seem that the present emergency facing the country would justify the existence of such an institution,” said Charles B. Raymond, the Santa Barbara Community Foundation’s first president, in 1930 as the Depression brought desperation to so many Santa Barbara residents.

Then – as now – the Foundation stepped into quick action, offering emergency employment for workers to improve city property, and by supporting the Red Cross Sewing Project that paid women to make clothes for citizens in need. Facing child hunger during the Depression, which is disturbingly ubiquitous today, the Foundation contributed to the Community Chest Milk Fund, which helped young children gain weight and fight off tuberculosis.

In the 1940s, the world was at war and Santa Barbara County was struggling through years of severe drought. The Santa Barbara Foundation jumped into action, seeking plans to retain more water, and defraying the travel expenses of two county supervisors to plead for the construction of the Bradbury Dam, which would, at least before the ravages of climate change further strained the water supply, ensure that the shortages of the 1940s were not to be repeated.

Following the Civil Rights gains of the 1960s, the 1970s saw the emergence of environmentalism in Santa Barbara and the creation of a nonprofit infrastructure to meet the social justice challenges coming into ever starker relief here and across the nation.

“The Foundation must broaden its assistance in the community to meet current needs,” said then-Foundation President Harold W. Beard. “The pattern of giving followed in its past history must be reviewed in light of changing times and problems.”

Catalyzed by a devastating oil spill off the Santa Barbara coast in 1969, local activists came together to create the Community Environmental Council. With significant Foundation support, the council would, in 1975, start the nation’s first-ever recycling center, an achievement with long reverberating implications. In 2020, the organization celebrated its 50th Anniversary of Earth Day in Santa Barbara, the oldest event of its kind.

During this era, social issues like child abuse and sexual violence were met with Foundation-supported, sector-leading nonprofits including CALM (Child Abuse Listening & Mediation) and Standing Together to End Sexual Assault then known as the Santa Barbara Rape Crisis Center. Capital contributions to the Boys & Girls Clubs created the network of physical locations that are so important to working families today.

Laurie Leis, the executive vice president of advancement at United Boys & Girls Clubs of Santa Barbara, remembers looking at a Boys & Girls’ budget from 1938 and seeing a $250 donation from the Santa Barbara Foundation. “They are always the first ones to come in and say, we are going to help,” Leis says. “They are the voice for us. They bring a call to action when so many voices go unheard in this community. The Foundation is the voice of the hungry, the homeless, the families in need.”

“We wanted to broaden our reach by narrowing our focus, and we found that a handful of key social and economic challenges reverberate into every aspect of Santa Barbara County’s health and well-being,” said Foundation President & CEO Jackie Carrera.

The Foundation immediately went to work to support vulnerable populations in areas of behavioral health, health care, food, shelter, and safety, while uplifting working families in the areas of childcare, workforce development, and workforce housing. The Collaboration for Social Impact was developed to advance the strength and capacity of nonprofits, and, by virtue of the Foundation’s stature in the community, guiding individual and institutional funders to focus attention on pressing issues in the community. While thoughtful, the Foundation couldn’t have imagined how prescient the strategy would prove.

“As we navigate the COVID-19 pandemic, social injustices, and economic worries, we are confident that our focus on vulnerable populations and working families is the correct direction,” Carrera said. “We have already experienced increasing need and will continue to follow our strategy to provide critical support in these areas.”

Like Foundation presidents before her, Carrera immediately recognized the need and, with her team, got to work. In March 2020, the Foundation reactivated its Community Disaster Relief Fund, which had been established in the wake of the 1/9 Debris Flow. Days later, the Foundation, in collaboration with United Way, the Hutton Parker Foundation, and the Foundation Roundtable, launched the COVID-19 Joint Response Effort to provide funding to nonprofits responding to Santa Barbarans mounting emergency needs. By the end of October, a 34-member funders’ collaborative that the Foundation co-leads has mobilized over $18.9 million to support individuals and nonprofits in Santa Barbara County.

Carrera noted, “with decades of community knowledge, a tradition of diverse, meaningful support, and outstanding stewardship of community investments, the Santa Barbara Foundation is well-positioned to support the health and vibrancy of Santa Barbara County, now and for decades to come.”

For over 92 years, the Santa Barbara Foundation has been a catalyst for change. We analyze issues to identify challenges that burden people every day in Santa Barbara County. We convene community stakeholders to build coalitions and partner with nonprofits and other leaders working on the front lines. Together, we chart a direction and mobilize people like you to support the dynamic initiatives that makes this a better place, now and for generations to come.

The Foundation is the “community living room,” a place where donors, community members, and leaders of its business, nonprofit, education, and civic sectors can gather, “to discuss and problem solve. Collaboration is layered into everything we do.

The Santa Barbara Foundation leads the effort to bring people and resources together to work for large scale, sustainable improvements in the community. We do that by facilitating dialogue among stakeholders- business leaders, government representatives, leaders of nonprofit organizations, residents and funders who want to create positive change. We look for the chance to form strategic partnerships to leverage our collective strengths and maximize the power of our donor’s dollars. Because we do extensive research into the greatest needs of the community and the people who deliver services, we are positioned to champion specific causes and organizations. We then advocate for the funding to transform innovative ideas into reality. Learn more about our work within the community.

There are approximately 1,900 nonprofits in Santa Barbara County. Even the most diligent donor would find it daunting to try to learn about all of them and vet their work. In partnering with the Santa Barbara Foundation, donors can be assured that we award our grants through a rigorous process of research, planning, due diligence and evaluation. We work to identify and prioritize critical needs for strategic grantmaking requiring special focus and additional organizational resources. Once funded, we monitor and evaluate these initiatives for impact. We are committed to working with providers to maximize their effectiveness. Learn more about our grantmaking.

We are grateful that for more than 90 years the people of Santa Barbara County have trusted us to steward their charitable assets. Our team of philanthropic advisors help donors navigate the logistics of giving, and work with them to create a customized plan that aligns with their goals. As a community foundation, we have a responsibility to expand financial capital by reaching out to individuals and institutions to raise funds. We are committed to pooling our collective resources with those of forward-thinking funders to build scalable solutions. The Santa Barbara Foundation invites and encourages all donors, contributing all size donations, to join us. Learn more and become a Partner in Philanthropy.

The Santa Barbara Foundation believes a healthy, high-achieving, creative social sector enables our county to fulfill its potential. To help make our nonprofits stronger and more resilient, we share knowledge through a series of capacity building workshops, leadership development, and technical assistance programs. We engage with practitioners to develop successful approaches for improved outcomes in the community. We connect them with funders and other nonprofits to make their efforts more powerful. Since this can be a demanding line of work, we recognize and reward hard work and excellence of those working in the social sector. Learn more about the Collaboration for Social Impact.