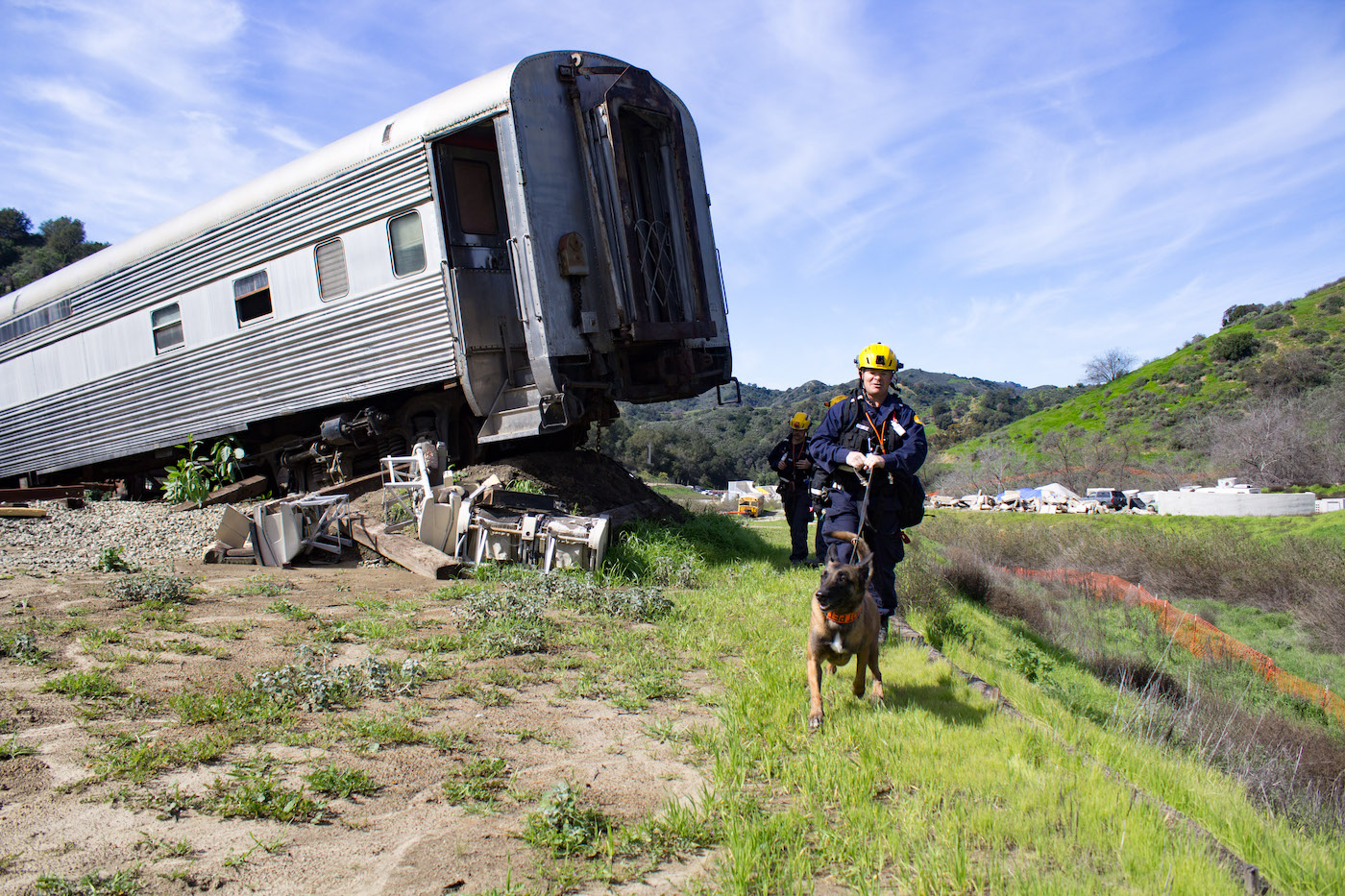 National Disaster Search Dog Foundation has had tremendous success in rescuing rambunctious shelter dogs and turning them into highly-trained rescue canine workers who, teamed with human partners, help find survivors buried in disaster wreckage while they’re still alive. It’s a story that’s both heartwarming on every level and awe-inspiring in its purpose and efficiency.

But, for some reason, while dog teams have been placed among fire departments across the country and even in Baja, Mexico, not everyone knows about SDF and its important work – including people located just an hour’s drive north from its massive national training center in the hills of Santa Paula in Ventura County.

“No matter how many stories we work on and ways we tell them, and no matter how many advertisements we place, a lot of folks in (the Santa Barbara) area still don’t know that we exist practically in their backyard,” said Denise Sanders, SDF’s Senior Director of Communications and Handler Operations, sounding cheerful despite juggling taking care of her kids and speaking to a reporter on Valentine’s Day afternoon.

That oversight does seem surprising given that SDF is celebrating its 25th anniversary this year, marking a quarter-century since Wilma Melville, one of the FEMA-Certified Canine Search Specialists deployed to the Oklahoma City Bombing in 1995, founded the nonprofit to address the gap in our nation’s disaster response network by creating a new methodology for training disaster search dogs. SDF recently met its initial goal of training 168 search dog teams – one for every victim of the bombing – but the need keeps growing.

Maybe knowing all those details doesn’t matter all that much for locals regarding the actual services that SDF provides, given that a search tandem team for Santa Barbara is already in place. Rescue dog Waffles (who replaced his retired canine brethren Riley) and his handler, Santa Barbara County Fire Captain Eric Gray, have been ensconced in the community since 2009. They, like all the teams, are ready and able to immediately spring into action when disaster strikes, deployable locally or around the globe, and SDF certainly proved there was a lot of bite in that dog, so to speak, when 18 different teams were mobilized and utilized within hours of the 2018 Montecito mudslide and debris flow. (We wrote about that in the initial annual book version of The Giving List.)

Still, additional awareness sure doesn’t hurt, especially in a community as philanthropic and animal-loving as ours.

So Sanders is only too happy to talk about the 81 teams stationed in fire departments across the country, and the up to 40 dogs that live in SDF’s kennels at any given time, eagerly awaiting daily training sessions at Doggie Disneyland, Sanders’ term for the Santa Paula campus.

“We have rubble piles, a train wreck, a collapsed freeway, all sorts of pseudo-disaster sites for training,” she said. “It’s not your normal dog toy stuff, but it certainly is for these dogs. They absolutely love it!”

Indeed, a relationship with toys is the first attribute trainers look for when selecting shelter dogs to SDF’s program, said Sanders, who specializes in canine wordplay among her communication skills.

“The best indicator is what we call ‘toy drive,’” said Sanders, a Santa Barbara native who attended Laguna Blanca from grades K-12, and then worked for the Sheriff’s Department as a dispatcher for six years before landing the SDF job. “It’s having a near obsession with a toy, whether it’s a tennis ball, a stuffed animal, or anything the dog is into. These dogs will not let it be. It goes way beyond playing fetch with your family pet for 10 minutes in your backyard. This is a whole new level. These dogs will not quit until they’re exhausted, and it’s that determination that is great for what will eventually become their job (of trying to find survivors).”

That energetic obsession probably doesn’t make for the best pets, though, Sanders said, as the intrepid canines can be a lot to handle, which is why so many end up at the shelters. “But the way we see it, that’s not the dog’s fault. That’s just who they innately are. With proper guidance they can be able to channel that drive into something productive versus something destructive.”

That’s part of what makes the National Disaster Search Dog Foundation a rare win-win-win-win organization. The dogs win because they get saved from life in shelter (or worse) and instead get to do what they’re action-driven personalities desire. Potential disaster victims win because the highly trained dogs are experts at finding folks who have survived the initial event in ways mere humans can’t. First responder organizations win because the addition of a dog to their team of rescuers improves services while costing practically nothing as NSRD’s program includes all fees, licensing, medical bills and even dog food through the dog’s life. SDF itself wins because the trainers and staff like nothing better than another successful “Rescued to Rescuer” story.

Amazingly, that all happens without any government funding at all. But it doesn’t come cheap.

Sanders estimated it can cost $50,000 per dog, including combing the shelters for suitable recruits, initially training the search dogs and their handlers and providing ongoing training to keep the team sharp, plus the lifelong care that is guaranteed when a dog is accepted into the program whether or not the animal gets partnered or deployed.

Fortunately the COVID-19 pandemic hasn’t put a major dent in SDF’s services, as the training center allows for lots of social distancing, and most other meetings can be accomplished remotely. On the other hand, there’s an increasing need for these rescue teams as climate change and other factors have noticeably amped up the incidence of natural and other disasters, from wildfires to floods, mudflows, and even, recently, a scaffolding collapse at a meat-processing plant.

“The whole entire operation revolves around the dogs, and we can’t do it without the support of the public,” Sanders said. “Whatever people donate truly helps go to the mission and what we need to do to continue to expand. We already have a waiting list (of fire departments wanting to house a team) which we’re working our way through, and we also have to replenish as teams retire. We can’t produce the dogs any faster because we want to keep our quality high, but we’d love to be able to work with more teams at the same time.”

“We’re always looking at ways to better our advanced search team training, to provide challenging situations to up their deployment readiness and be sure that when they step off that bus or that plane, they already have some experience that will help them through whatever they’re about to face.

“Wilma did a great job setting us up. It’s 25 years later, and we’re still trucking along, innovating as best we can, striving to remain leaders in the field.”

Our mission is to strengthen disaster response in America by rescuing and recruiting dogs and partnering them with firefighters and other first responders to find people buried alive in the wreckage of disasters.

Disasters Happen. It’s Not a Matter of If, But When…

In a time of crisis, nothing matters more than who your partners are. During Santa Barbara‘s 1/9 debris flow which followed the 2017 Thomas Fire, National Disaster Search Dog Foundation, with 18 of their search teams deployed, played a crucial role in our search and rescue operation. I cannot say enough about the vital importance of the work that is being done by this organization.

Saving Lives, Both Human and Canine

The National Disaster Search Dog Foundation has rescued and trained 279 dogs that have, in turn, rescued humans in disasters. Over 26 years, these expert teams have worked in the largest disasters: from 9/11, Hurricane Katrina, and the earthquakes in Haiti to missing persons and small structure collapses throughout the country.

The foundation has pioneered a model for screening, training, and providing a lifetime of care for each dog it rescues, along with ongoing expert support for handlers.

But the U.S. only has half the amount of search teams truly needed. The National Disaster Search Dog Foundation has a goal of training 20 teams in the next year, while ensuring every dog that enters its program will be successful, whether as a disaster search dog or in another career, by fostering the bonds that will create the next generation of working dogs.

With a gift to the foundation, you can save lives both human and canine.

Be Part of the Search today.