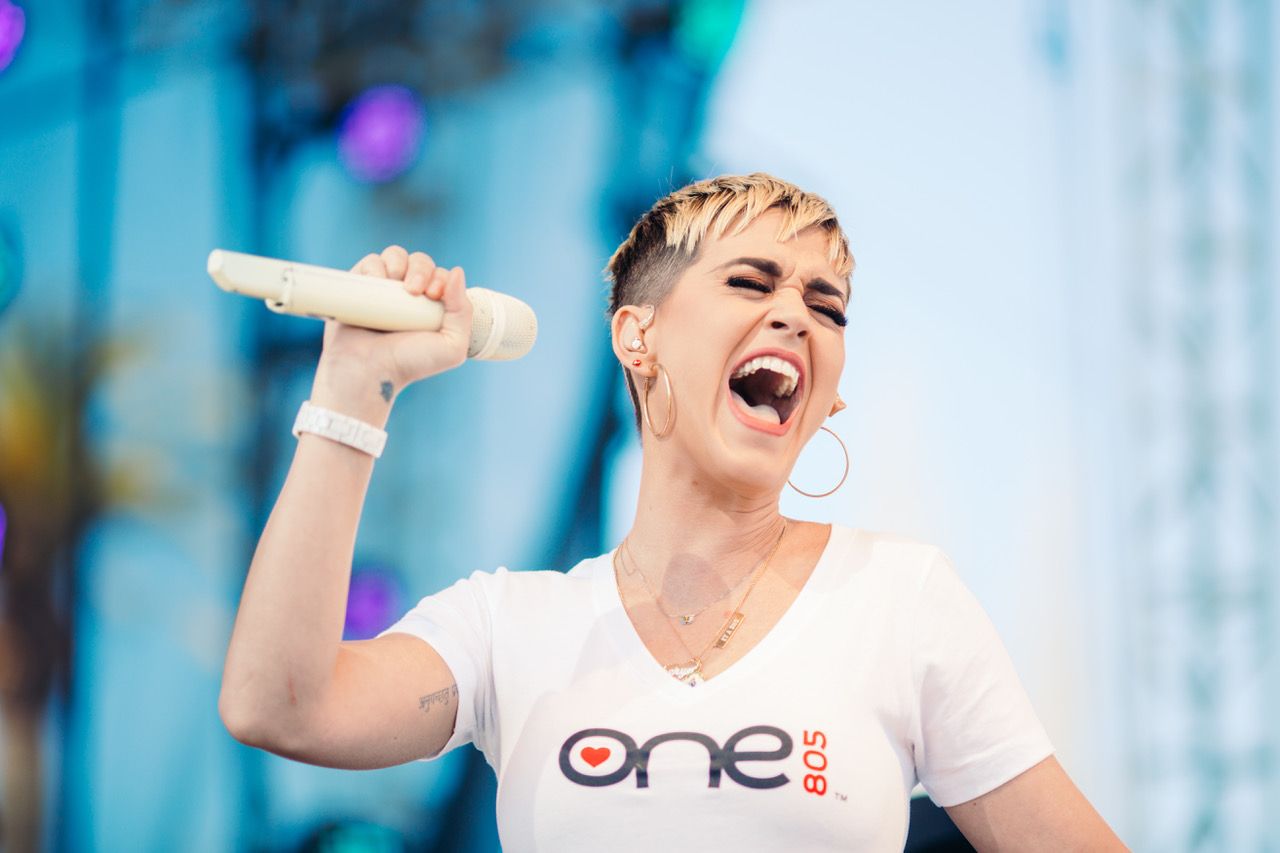 Everybody in town likely knows about One805. Sure, they’re the organization who three years ago created the “Kick Ash Bash,” mounting the massive benefit concert as a way of thanking both the firefighters whose brave stand against the Thomas Fire in December 2017 saved untold homes in Montecito, as well as honoring the already weary first responders who had barely had a break before having to jump once more into the fray to help rescue many Montecito neighbors when a 100-year storm flooded the burnt hillside resulting in the devastating debris flow a few weeks later.

The day-night celebration in late February brought out the Goleta-born/Montecito resident turned international pop star Katy Perry and a whole host of other celebrities with connections to the area. Brief speeches from the likes of Montecito residents Dennis Miller, Ellen DeGeneres, Jimmy Connors, and Jane Seymour, plus fire chiefs and other first responders delivered during set changes for musical performances by Kenny Loggins, Alan Parsons, Katharine McPhee, Richard Marx, Wilson Phillips, Glen Phillips, Dishwalla, David Foster, and more. The evening “After Bash” was hosted by Academy Award-winning actor Michael Keaton and featured David Crosby and the Sky Trails joined by Iration, Robby Krieger of the Doors, the Caverns, and others.

But the Bash also had another benefit that went beyond gratitude: raising funds to better equip the first responders to meet natural disasters, as well as offering counseling services and victim relief. So, while scenes from that stirring event still reverberate in our collective memories, what also has had a lingering impact around town is the three custom mobile command units One805 purchased from $2 million in proceeds to donate to the police, fire, and sheriff departments.

It wasn’t just the gifts that have made a difference, though, explained Angela Binetti Schmidt, the nonprofit’s executive director.

“The different departments said, this is amazing that we’re all talking and we’re collaborating, and learning from each other,” she said. “They told us they wished it could continue because it makes it easier for all of us to do our jobs better.”

That cemented the idea of turning One805 into an ongoing nonprofit that officially became a 501(c)(3) nonprofit in late 2019, founded by executive committee members Richard Weston-Smith, Eric Phillips, and John J. Thyne. The trio meet periodically with an advisory council consisting of the 11 department heads to field funding requests and collaborate on the decisions of what to allocate.

Its first full-year grant awards in 2019 included a tactical robot to be shared between the Sheriff’s Special Enforcement Team and the city police SWAT team, as well as a modem for the County Fire Chief’s Association Incident Management Team.

Three QRET Helicopter Harnesses for the County Sheriff/Fire Air Operations Unit were the biggest items in the 2020 grant awards in February, all meant to fill in the spaces where needed equipment projects can fall through the cracks due to arduous budget processes or other issues.

“Technology moves so fast, and it’s important that our departments have the equipment and technology to protect public safety,” she said. “And even if they had all the funding in the world, it’s like molasses to get things passed through the budget, which takes a year just to apply. So, if we donate it, they can get it immediately.”

Which leads us to the current grant requests that the One805 board approved in February: a rescue rope system for $3,700; various drones to assist in remote rescues and other emergency situations at a cost of $14,000; purchase of the Rosetta Stone language development program to assist first responders in communicating with non-English speakers for $1,890; the aforementioned face shields and helmets to be used during larger group events involving protests for $5,500; four rescue struts that assist in extrication from vehicles and structures for $11,000; advanced technological products to assist with criminal investigations for $14,500; and a portion of the costs for the helicopter that supports the county first responder agencies for $35,000.

Nothing terribly glamorous. But things don’t have to be monumental or cost mega-bucks in order to matter.

“We have to be conservative because we weren’t able to do our fundraiser in 2020 because of the pandemic, and we wanted to respect the other nonprofits and what’s going on with a lot of donors who have diverted their funds to coronavirus relief,” said Binetti Schmidt.

“So, it is pretty small, but these things are really impactful. When first responders are interacting with the general public, there’s some language barriers where the program could really make a difference. We found out the face shields matter during the George Floyd protests that turned violent in Santa Maria last summer. And those tech products really help because you can’t have the bad guys having better equipment and better technology than our departments.”

What makes the current list even more exciting, Binetti Schmidt said, is that the requested items speak to one of One805’s tenets.

“Collaboration and efficiency really meet our goal of wanting things that we donate to be fully utilized and shared,” she said.

Take note that One805 is not dormant in between considering the equipment requests from first responder organizations. In fact, in times of crisis, the nonprofit can be something of a first responder itself.

That’s what happened when COVID came to town. Within a few days of the first lockdown orders in March 2020, One805 – knowing that the official first responders were once again serving on the front lines while the rest of us sheltered at home – immediately began seeking donations of critical supplies including masks, gloves, liquid hand sanitizer, and protective medical clothing to distribute to medical and police, fire and other public safety departments throughout the county. Later they purchased and distributed 45 electronic defoggers for all the departments in the county to help sanitize public spaces and indoor environments to fight COVID.

“As an emergency response organization, we’re on the forefront in collaborating with the departments all over the county because that’s exactly what happened after the debris flow,” said Binetti Schmidt, explaining that having family in Washington State, where the virus first showed up, helped her to know what was coming.

“That’s why we were created. There are always a lot of missing pieces in bringing the community together and quickly responding.”

The nascent nonprofit’s nimbleness comes from the experience of its founders – each of whom had spent time previously on the boards of many nonprofits while Binetti Schmidt is the organization’s only paid employee.

“We brought what we’d learned before into One805,” she explained. “And even before the virus, we were operating mostly virtually.”

Now, as increased vaccinations are bringing hope of an eventual end to the pandemic, One805 would love to stage another big benefit event for the community, perhaps in the late summer or early fall, Binetti Schmidt. But in the meantime, there’s the $85,000 in approved requests to fulfil.

“We’re just hoping this article speaks to people and that they are willing to help,” she said. “Maybe they want to underwrite one of the specific requests. Or they have a lead where we can get drones at cost, for example.”

A large donor taking care of all of this year’s latest requests would be dandy. But the gestures don’t have to be grand. In keeping with its mission to unite the community, One805’s memberships start at just $25, and come with swag you can wear proudly around town — or rather will be able to show off in public as the pandemic restrictions continue to ease.

But no matter what happens with COVID or whatever nature has in mind for us next, One805 will be ready to support our first responders in keeping us safe, Binetti Schimdt said.

“If there’s a need that arises, we want to do what we can.”

One805 is a permanent 501(c)(3) corporation, raising funds for all three First Responder groups – Fire, Police, and Sheriff – purchasing equipment, counseling & taking care of those who take care of us.

“One805 has been a valuable partner for first responders in Santa Barbara County. They are dedicated to supporting community preparedness, public safety, counseling services and financial support for un-budgeted equipment. One805 re- cently purchased sanitizing foggers to help keep us safe from COVID-19 and also provided QRET helicopter harnesses for the County Air Support Unit.
Thank you for making a difference here in our local community.”

Through local natural disasters and COVID-19, the team at One805 has recognized the power of Santa Barbara’s “social solidarity” – the interdependence between individuals in a society – to survive a crisis together.
Despite the glamour of One805’s first benefit concert, the charity is dedicated to including ALL county residents in equitable safety initiatives. Future benefit concerts titled “One805 Live!” will further the tradition of live music to raise funds for public safety emergencies.
“One805’s mission is to support the public safety needs of our community in an efficient, equitable fashion,” says Executive Director Angela Binetti Schmidt. “We are not another black-tie charity. We are stronger as ONE and are asking everyone to join. Our $25 members are just as appreciated and important as our honorary board $10,000 members.” Honorary board members meet with public safety Department Heads to collaborate on donation expenditures.
Together we are One805. Visit One805.org to learn more, become a member and donate.