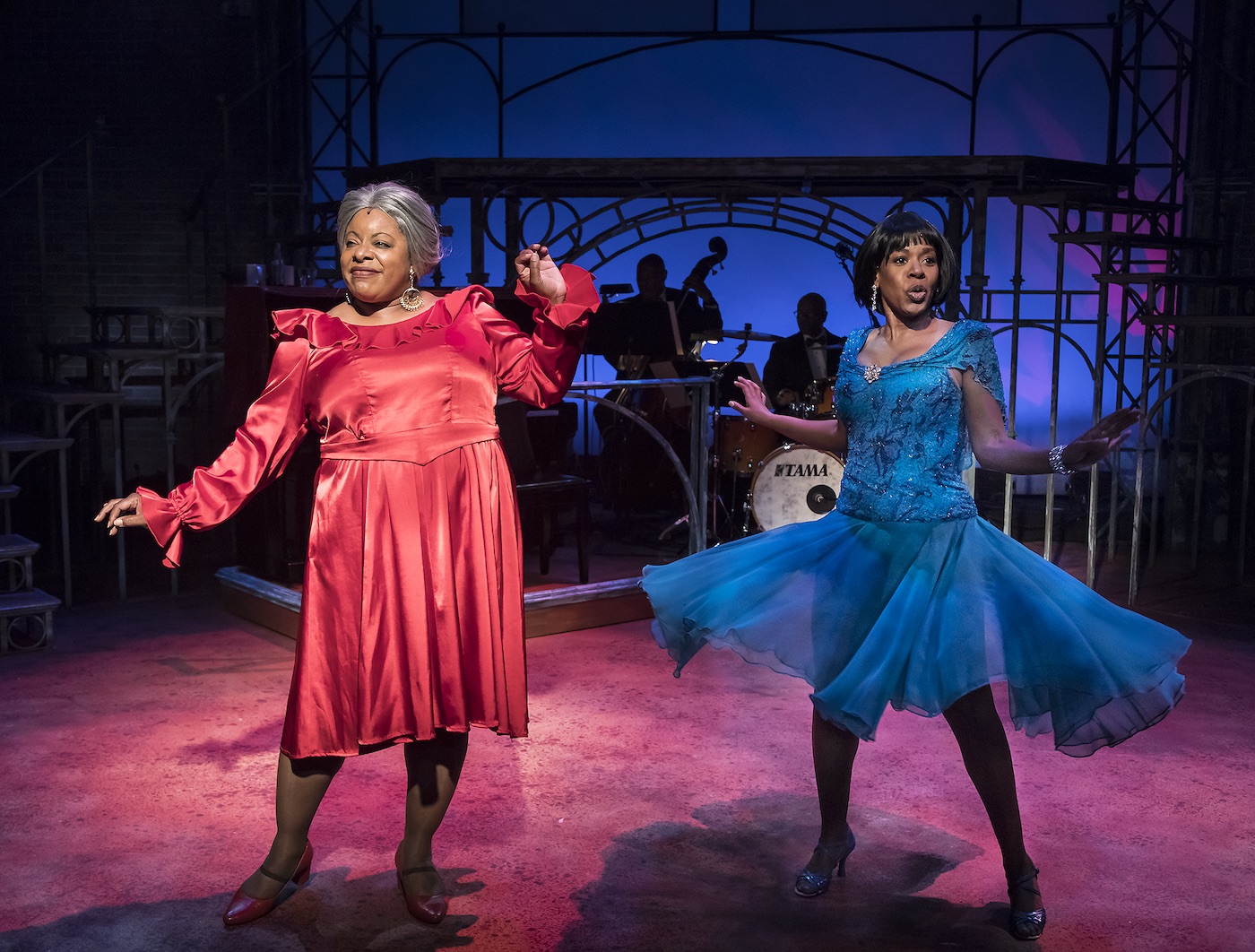 The Ensemble Theatre Company is known for high-quality productions, including Cookin’ at the Cookery

Ensemble Theatre Company (ETC) executive artistic director Jonathan Fox was already talking about reopening when he was interviewed for the original Giving List book connecting philanthropists and nonprofits that we published last November. At this point, to the surprise of no one, six months later that still hasn’t happened as the pandemic pounced once again with a third wave over the winter, resulting in continued lockdowns and scotching any plans to offer even a vastly reduced 2020-21 season.

But the coronavirus crisis only served to confirm Fox’s desire to serve the community — both artistically and otherwise — with whatever ETC could come up with.

“Like every other organization, we had to think fast to figure out what we could do in lieu of performances with live audiences,” Fox recalled, noting that ETC considered outdoor productions, Zoom readings, and even screening its archive videos as some other Santa Barbara performing arts companies did.

“But I was not very happy with the archived videos that were available to stream because we don’t have the library of, say, the National Theatre in London, and I just didn’t want to present something that I thought was not up to the quality that we are now used to.”

Indeed, figuring out a direction required reexamining the role of theater in a modern society, Fox said.

“I think theaters in general are grappling with the question of, ‘What is our mission?’ Is it to sell tickets to live performances or is it our mission to serve and present theater to the community?”

Fox, of course, opted for the latter, but things still had to happen “in ways that made sense for us,” including measuring up to Fox’s and ETC’s ever-increasing standards of quality as the only professional theater company in Santa Barbara.

Initially Fox turned instead to education, one of ETC’s core missions, and turned the Young Playwrights Festival into a virtual program complete with presentations of the student-created, 10-minute plays that culminated months of work including weeks of study and personal guidance from professional playwrights. (Ironically, this year’s Young Playwrights Festival, which aired last weekend, might be the last production to be shown only virtually due to COVID restrictions. The replay is available on demand on ETC’s YouTube channel.)

For the larger community, Fox also arranged a virtual town hall discussion about American Son after ETC’s planned Santa Barbara debut of the gripping Broadway show about racism and the police was the first victim of the lockdown. After the George Floyd killing, subscribers had asked if ETC could offer a play reading, but the rights are controlled by streaming behemoth Netflix. Instead, Fox asked Coffee with a Black Guy’s James Joyce to co-host, and they were joined by more than 100 local residents over Zoom for what Fox called “a very lively discussion, to say the least, about the play but also about racial issues here in Santa Barbara.”

As winter approached, Fox found himself “wanting to give a gift of theater for the season to the community,” and approached the actors’ union about producing an adaptation of A Christmas Carol live with the actors on stage but no audience in the seats. When that fell through at the 11th hour, Fox instead created an enhanced virtual offering that found the actors in modified costumes in their homes, with the intended radio play becoming a little more like a parlor reading, intimate if not quite as interactive.

In February, ETC offered a valentine to the community via connecting local actors Meredith Baxter, Michael Gross, Gregory Harrison,and Amanda McBroom, among others, along with beloved Montecito author T. Coraghessan Boyle, for The Look of Love, a free on-demand streaming program of short tales and music — all meant to offer healing as the pandemic neared its one-year anniversary.

But this wasn’t your typical Zoom issue: longtime ETC-associated helmer Jenny Sullivan directed while professional videography came largely from ETC education director Brian McDonald (although Boyle’s reading of I Walk Between the Raindrops, written in the aftermath of the 2018 debris flow from his Frank Lloyd Wright-designed home, was shot by his son).

“We tried to do something where people weren’t just sitting in front of their computers with their headphones on reading to their iPhones,” Fox said. “It was much more like a performance, although it wasn’t even close to coming to the theater and seeing something live.”

Stretching further, just last month, Fox mounted his most adventurous and ambitious project yet, producing and directing An Iliad, a 100-minute-long version of Homer’s epic poem reimagined for the 21st-century stage as a one-man show. The production featured the return to ETC of the virtuosic actor John Tufts, accompanied by original cello music performed live onstage by Santa Barbara Symphony’s Jonathan Flaksman, with multiple cameras and a highly polished, well-rehearsed presentation, although, again, viewers could only see the searing production via video on their computers, TV screens or other electronic devices.

This last event actually lost money. But that wasn’t the point of producing it, Fox said, alluding to the earlier question of the theater’s mission.

“There were just so many reasons it was worth it to try to do something along those lines,” he explained. “We wanted to see how much interest there was in streaming, and I wanted to work with cameras for the first time. But personally, I got such a joy out of being back in rehearsals for a real live performance. It was definitely a learning experience, but I also thought my instincts were pretty good on how we did it for the camera.

“We had some people say they wish they could see it live after watching the stream. And we got some feedback that while the production was really high quality, they still really missed the other aspects of going to the theater, being with other people, being inside the space, meeting the actor after the show.”

The productions also reached audiences across the U.S. and beyond, which while not part of ETC’s core mission, can only help with awareness of the company’s excellence and enhance its reputation. Most heartening, Fox said, was a common response.

“We had so many people tell us that they’d almost forgotten how wonderful live theater is and that they were really excited about the Ensemble coming back to the New Vic, which is truly a state-of-the-art theater, a real jewel for the city. It really seemed to whet people’s appetite.”

Fortunately, that hunger is about to be sated, as ETC has booked a full five-play 2021-22 season that launches in October with Tenderly, The Rosemary Clooney Musical starring the decorated actress Linda Purl and featuring a live three-piece band that was supposed to close out the 2019-20 season. Also, on the board is the long delayed, but still timely, debut of American Son, with three more selections yet to be announced.

Having a full slate to offer was important for Fox, who said he presented the ETC’s board with two different ideas for the season, one vastly scaled back and the other big and bold.

“The majority said, ‘Let’s go big,’” he said. “We want it to be exciting. We want people to know we’re really back. So that’s what we’re planning.”

The next official event, however, is a fundraiser, a benefit to refill some of ETC’s coffers that, while never truly threatened, did see a sinking of levels akin to a moderate drought year’s effect on Cachuma Lake. A campaign over the winter with a goal of $400,000 actually raised more than $460,000, which Fox called “an extraordinary, extraordinary experience because we had so many people who donated telling us we want to make sure that you are coming back.”

That result was among the strongest evidence of community engagement that buoyed the executive artistic director during the pandemic.

“We could not have survived this past year, past 15 months, without the financial and emotional support of our community,” Fox said simply.

ETC will celebrate its re-opening with Curtain (Back) Up! on August 15, the title playing off the Curtain Up gala that heralded the opening of the theater’s home at The New Vic almost a decade ago.

Guests will gather in the garden at the Santa Barbara Club for appetizers followed by a sit-down dinner inside the club before returning to the garden for dessert and an auction, as well as entertainment provided by faculty and graduate students from the music department of UCSB. At the event, Ensemble will also be awarding its first-ever Extraordinary Awards to patrons of ETC who have made exemplary contributions of time, talent, and support over the years. The initial recipients being celebrated on August 15 are Debby and Peter Stalker, Derek Westen, and Dana White.

Single tickets are available for the event at $300; visit https://etcsb.org/support for details and other ways to arrange tax-deductible donations that subsidize ticket prices, fund education outreach programs, and support artistic freedom.

But even before the August 15 fundraiser, community members can show their support by purchasing season tickets to ETC 2021-22, which can go a long way toward indicating that the ambitious program will be rewarded.

“No one really knows how many people will be coming back or if they will need more time before they do come back,” Fox said. “We don’t know at what level or how close we’re going to get to where we were before the pandemic, both in terms of ticket sales and rentals of the theater. It’s going to take a while to build back that business. So, the community’s financial support is as important as ever. Season ticket sales will tell us that we are on track to getting back.”