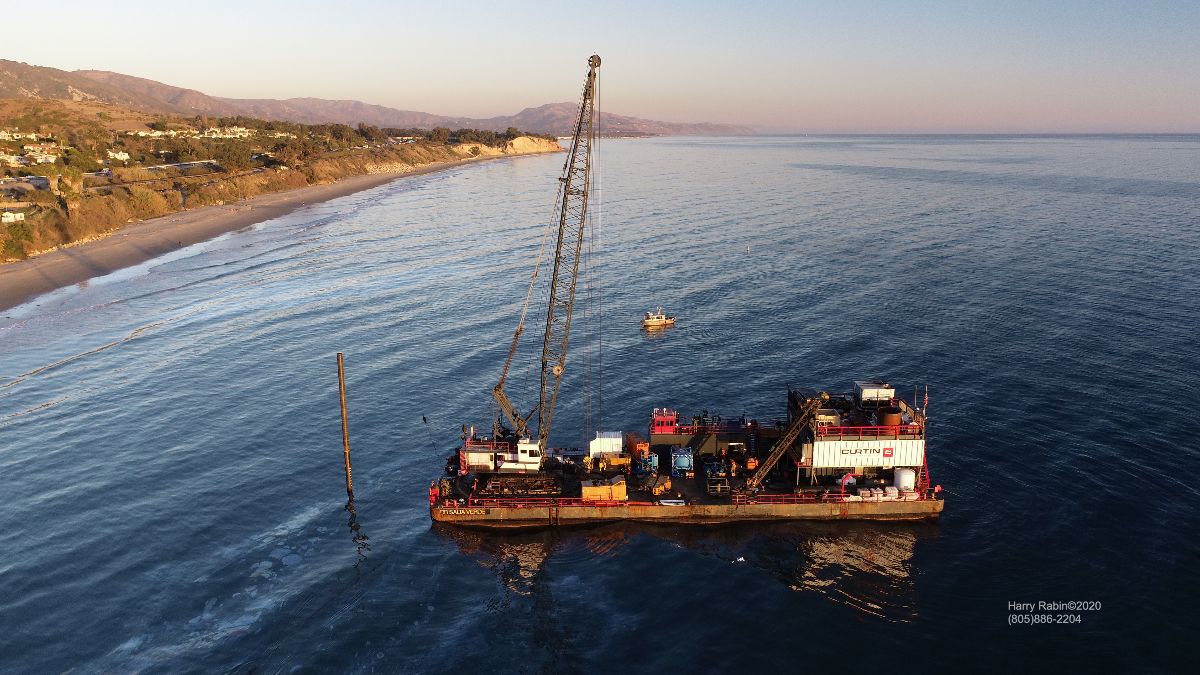 The pipe pile barge at work. Photo by Harry Rabin.

Featuring HTO & Expert Panelists! (And a sneak preview of the next project to come!)

The webinar was produced and moderated by documentary filmmaker Harry Rabin, CEO and founder of On the Wave Productions, who worked alongside the State Lands Commission’s contracted engineers and divers in the Summerland oil well field. The event featured panelists who were involved in this environmental success, including:

• Joe Fabel – an attorney for the SLC;

• David Valentine, Ph.D. – Founding Director of the Marine Science program in the College of Creative Studies at UCSB & current Professor of Geochemistry and Microbiology at UCSB;

Many HTO fans know about our organization’s work capping the leaking oil wells of Summerland, which we have been able to do with gracious, generous help from Nora McNeely Hurley’s Manitou Fund. For decades, oil has been leaking from the wellheads of some of the first offshore oil rigs in the world, over 400 of them right here in Santa Barbara County. The beaches in Summerland were a major source of oil pollution, which, spread as far southeast as Carpinteria and northwest along the coast to Miramar, Hammonds, and East Beach.

Finding the exact locations of these leaks and making the determination that they were indeed old wellheads vs. natural seeps took years of research both above and below the ocean. Good observations, sophisticated technology – from drones and ROV’s to multibeam sonar – and determination, all would be needed to pinpoint the exact location of each well. Much of the sophisticated gear was brought in by Harry Rabin, Field Advisor to Heal the Ocean, who is known for his work topside and underwater with such equipment. The SBMM Webinar, (click https://spaces.hightail.com/receive/YUmh5JUC7L/fi-fd177737-ebf1-42ff-a76f-4f1128416023/fv-49179ab5-ce3c-4234-8d92-e03d5792757f/SBMM%20LIVE%20Recording%20720P.mov to watch) gets into the nitty-gritty of this work.

The next two wells to be capped off Summerland Beach are Ohlssen #805 in July (on or about July 22/23) and Duquesne #910, which will be capped five months later, in December 2021. With these projects ready to roll, Harry and the InterAct team are already at work to identify the projects to follow in 2022: Treadwell #10, a notorious leaker, was successfully capped in 2020, but mysterious leaks have been floating ashore since, and the team has pinpointed three suspicious wells seaward of Treadwell #10, at the end of what was the Treadwell Pier. These are the next likely targets.