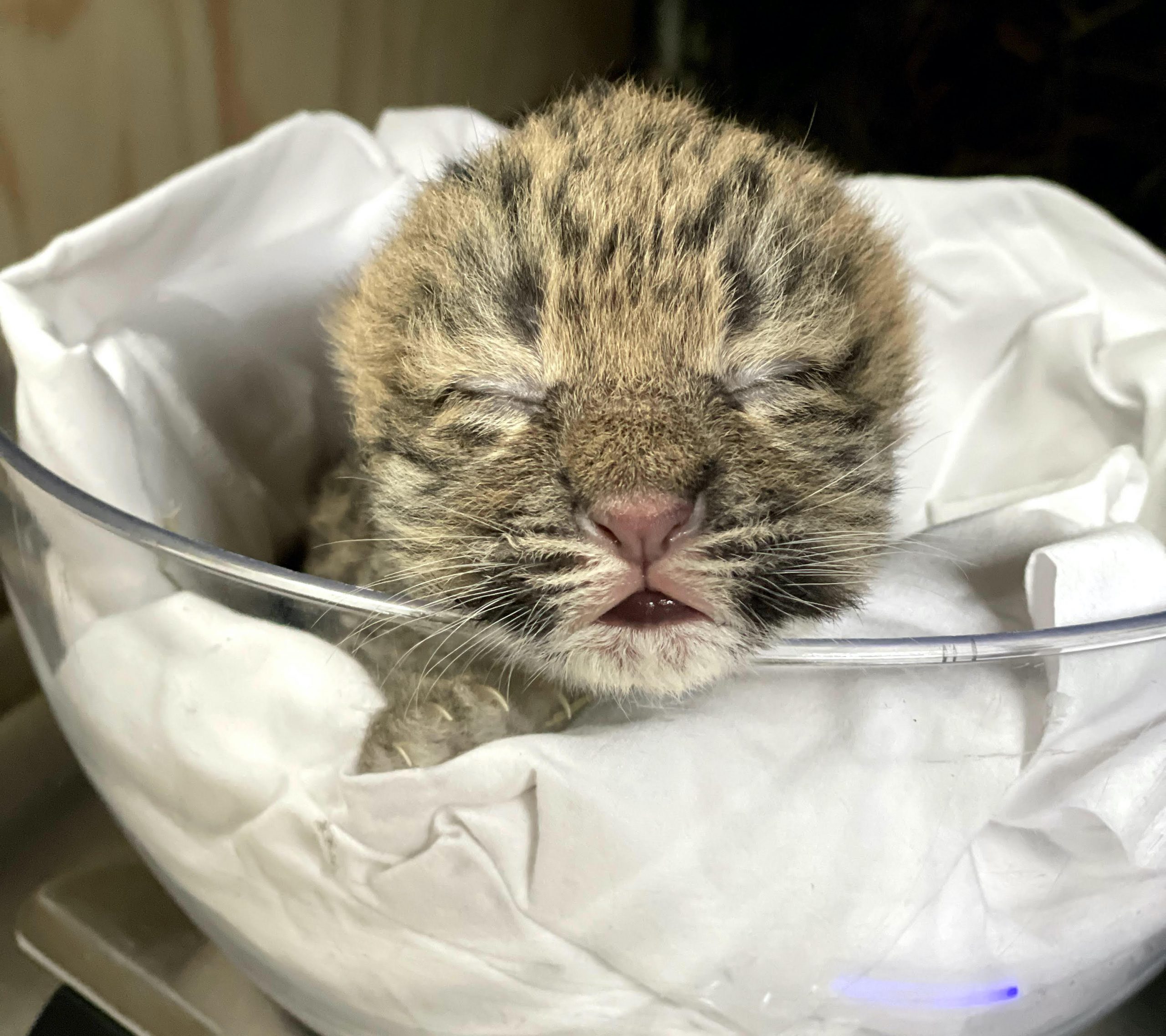 On August 6th at 4:05 am, the Santa Barbara Zoo’s Amur leopard, Ajax, gave birth to her first cub, and the two are doing well and currently bonding behind the scenes. The cub is a female and has been given the name Marta by her Premier Foster Feeder sponsors, Marta Holsman Babson and Henrietta Holsman Fore. The cub weighed in at 517 gms (1.1 lbs) at its first medical examination on August 6.

“Based on video monitoring, the cub appeared strong and active after birth,” said Dr. Julie Barnes, the Zoo’s Vice President of Animal Care & Health. “Unfortunately we did not see any confirmed nursing within the first 12 hours after birth, so the cub required some supportive care. Ajax was separated briefly from the cub and then reunited. Nursing was observed a few hours later. Ajax seems to be settling into motherhood well and is exhibiting good maternal behavior so far. The first week is a critical period for cub survival. If all goes well, we will leave mother and cub alone to bond during this time and continue monitoring them closely by video.”

Ajax and the new cub will remain in their den behind the scenes during this critical bonding period and will not be visible to the public for several months. Once mom and cub have bonded and the cub receives a clean bill of health, Ajax and the cub will rotate with the father, Kasha, in having access to their exhibit habitat. In the wild, males and females usually do not remain together after breeding occurs, so this separation is important for the safety of Ajax and the cub.

This is the first Amur leopard birth at the Santa Barbara Zoo in more than 20 years. Ajax is the most genetically valuable female Amur leopard in North America currently, so this first cub from her will contribute valuable genetics to the population in human care. Amur leopards are the most endangered of all the big cats, with less than 100 remaining in the wild, and the Zoo has been attempting to breed the species for several years now as part of the conservation efforts for this species. This is the fourth litter for Kasha, who arrived at the Zoo in March 2020, just prior to the first coronavirus closure. The pairing of Ajax and Kasha was recommended by the Association of Zoos and Aquariums (AZA) as part of the Amur Leopard Species Survival Plan (SSP), a program to maintain genetic diversity of threatened and endangered species in human care.

The Zoo will share viewing information as soon as it becomes available, but in the meantime, the public is encouraged to tune in to the Zoo’s social media channels (Facebook, Instagram, and Twitter) for regular updates on Ajax and Marta.

The public is invited to help welcome new cub Marta and support the growing Amur leopard family by becoming a Foster Feeder sponsor. New Foster Feeders at all levels will receive a personalized digital Foster Feeder certificate (includes honoree’s name and leopard photo), and recognition on the Foster Feeder board at the Zoo. Various donation levels are available on the website with different, wild benefits! For more information or to become a Foster Feeder, click here: https://sbzoo.pivvit.com/foster-feeder.

Amur leopards are the most endangered big cats in the world. They have also been called the Korean leopard, Far East leopard, and Manchurian leopard, which echoes their historic range, spanning the Korean Peninsula into northeast China’s Jilin and Heilongjiang Provinces, and across the border into the Russian Far East and Amur River basin, from which the species now takes its name.

Just under 100 are estimated to remain in the wild, in a small area between Vladivostok, Russia, and the Chinese border, along with a few scattered individuals in China. Their threats include poaching, forest fires, development, and, at this point, inbreeding. Approximately 200 Amur leopards are in human care, primarily in zoos in North America, Europe, and countries of the former Soviet Union, and are part of globally cooperative conservation breeding programs.

About the Santa Barbara Zoo

The Santa Barbara Zoo is open daily from 9 a.m. for members and 9:30 a.m. for general admission until 5 p.m. (seasonal extended hours on select days); general admission is $19.95 for adults, $14.95 for children 2-12, and free for children under 2. Parking is $11. The Santa Barbara Zoo is accredited by the Association of Zoos and Aquariums (AZA).  AZA zoos are dedicated to providing excellent care for animals, a great visitor experience, and a better future for all living things. With its more than 200 accredited members, AZA is a leader in global wildlife conservation and is the public’s link to helping animals in their native habitats. Visit www.sbzoo.org.