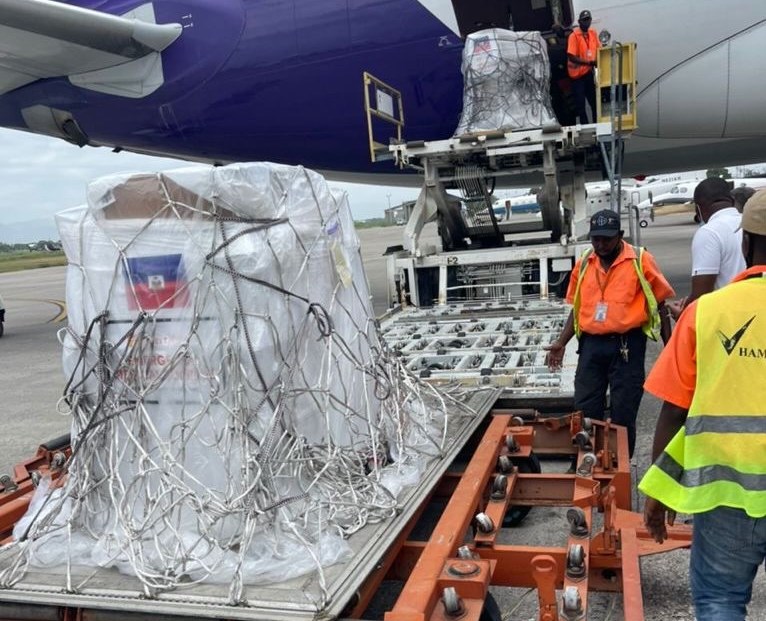 An air charter destined for Haiti that includes 165 pallets of medicines, emergency medical backpacks, IV solutions, medical tents, and other resource to help hospitals care for people affected by the recent earthquake

Direct Relief has been so efficient at serving as one of the country’s most effective humanitarian assistance organizations that it’s easy to overlook the scope and the scale of what the nonprofit achieves.

Just last week alone, for example, Direct Relief airlifted a huge planeload of medical supplies and other equipment to Haiti after the earthquake while at the same time responding similarly to wildfires in Northern California, Oregon, and Minnesota, and delivering 1.75 million doses of the Moderna COVID-19 vaccine to Mexico while also helping Santa Barbara Neighborhood Clinics administer the injections at its own headquarters. Not to mention its regular programs providing medicines and supplies on an ongoing basis to poverty-stricken locales.

That multi-pronged capability is one of the main ingredients that has made Direct Relief so successful as one of the world’s premier nonprofits, said Heather Bennett, Direct Relief’s vice president of partnerships and philanthropy.

“It’s part of what makes us unique, that at any given moment we’re directly responding to a number of major emergencies locally, nationally, and internationally,” she said.

It also helps that the organization is entirely apolitical and doesn’t take any government money, but is instead entirely funded by philanthropy.

“That makes us an ideal partner to help broker these transportation arrangements,” explained Tony Moran, the organization’s vice president of communications. “We’re able to facilitate the transportation of vaccines donated by the U.S. government to Mexico as well as moving Mexico-manufactured vaccines to Central and South America.”

Direct Relief’s COVID campaign started soon after the coronavirus started closing the country, with the nonprofit stepping in to fill a vital role via its ability to move much more rapidly than government bureaucracy might allow, with the organization quickly becoming the largest provider of PPE globally over the last 18 months making sure doctors were able to wear something more protective than garbage bags when treating infectious patients afflicted with the virus.

“Governments are really stretched at every level,” Bennett said. “They’re really pressured but they’re maxed out right now. We’ve been able to step up as one of the largest charities in the country to be able to fill that gap, providing public service on a private and humanitarian basis, and step into that role to help governments out.”

But perhaps what’s most astonishing is that all these massive humanitarian aid projects and virtually all Direct Relief’s efforts originate here in our comparatively tiny town.

But while Direct Relief is locally based, its relationships extend like tentacles to municipalities, nations, and other organizations around the world. Which is why a plane carrying much-needed medical supplies could take off for Port-au-Prince almost even before the shaking from the massive earthquake had stopped.

“We have relationships with hospitals and healthcare facilities in over a hundred countries and all 50 U.S. states,” Bennett explained. “When a disaster happens, we don’t call and just say ‘Nice to meet you. What can we do?’ We’ve built trusted relationships over decades through providing medicines and supplies on an ongoing basis every day — not just during disasters. So, when a disaster does happen, we do what we’ve already been doing. We just do more of it faster.”

What’s also helped Direct Relief respond so effectively to earthquakes and hurricanes is its commitment to following a learning curve.

“We don’t respond to one disaster in isolation,” Moran said. “We’re often coming off another recent response, and one informs the other. The massive, prolonged blackout in Puerto Rico taught us a lot about the precariousness of power and the problems of an unreliable grid, which allowed us to respond better in California when the power shut offs began. When there’s a fire in California, it helps us determine what supplies are going to be needed when responding to one in Australia. What we’re doing in different parts of the world helps us understand the common elements of disaster response.”

The Thomas Fire and Montecito debris flow in 2017-18 — during which Disaster Relief got as hands-on as possible, with staff members and volunteers handing out face masks in parking lots — also gave the organization something else that only a local disaster can generate.

“Something on that scale hadn’t happened in our local community before,” Bennett said. “Not only did it bring a different insight and perspective but also that element of empathy because now we’d suffered here too. Some of our staff lost homes, most of us were evacuated at one time or another. It made us a better disaster response organization.”

So, the nonprofit is even more ready to assist if another wildfire threatens Santa Barbara, with deep relationships with Montecito Fire and the Santa Barbara County Fire Department, among others, including helping to raise money for the Firehawk helicopter and otherwise equipping firefighters in town.

The impact of the local connection in all of Direct Relief’s operations can’t be overstated.

Not only are most supplies stored and shipped from the organization’s 155,000 square foot warehouse near the airport, but the majority of its funding comes from the Santa Barbara community, Moran said.

“People around the world are surprised that Direct Relief is based in Santa Barbara, and they wonder why a global humanitarian organization wouldn’t be closer to a major airport or port,” he said. But the reason why Direct Relief even exists is a testament to Santa Barbara. It’s very much an expression of Santa Barbara’s philanthropic capacity and generosity.”