Beyond Christmas Unity: No Off-Season for Food and Services 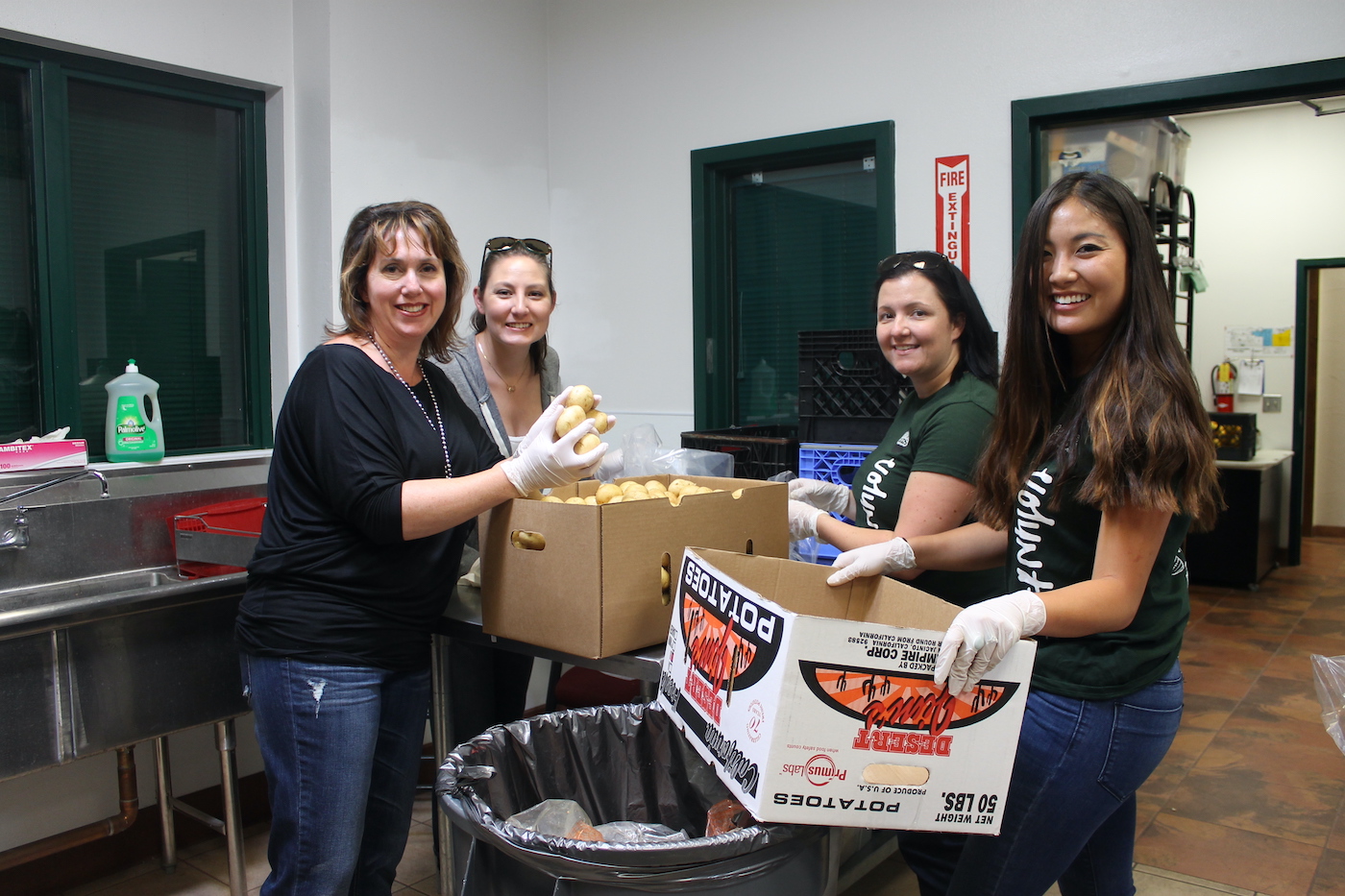 Unity Shoppe relies on volunteers, including this group from Deckers Brands

It might seem like bad timing to be writing about Unity Shoppe in the last week of the year, considering the nonprofit just held its 35th annual holiday telethon — the latest edition of the annual marathon fundraiser that airs on KEYT-TV — on December 12. After all, the event brings together all sorts of local luminaries including longtime Montecito-based Unity Shoppe supporters Kenny Loggins and Brad Paisley to encourage people to donate to fill the coffers for the organization that grew from a small charity to serve more than 20,000 people each year with free food and essentials from its downtown “store.”

But as it turns out, January is more than just a time of renewal for the nonprofit, as it’s also when restocking is a requirement.

“Our Quarter 4 is when everybody needs services, everybody needs food and toys and everything,” explained Liat Wasserman, Unity Shoppe’s director of development & communications, who assumed her position in September after working for the organization as an independent consultant for years. “We come into January 1, and we are decimated. We’re depleted. We have nothing: No food on the shelves, nothing to shop for. The place is a mess and it’s like we’re starting from scratch.”

It’s not that Unity supporters stop caring when the calendar changes to a new year. But things go in cycles, especially when you’ve got a fundraising event as well known as the telethon.

“Everybody remembers us at Christmas,” Wasserman said. “In spring when it gets warm again people are doing food drives and coming out to help us. But we’ve got this really dark period in between. But for our clients, their needs are not seasonal.”

Of course, Wasserman and her colleagues at Unity know how to handle the situation, as decades of experience have resulted in all sorts of refinements to the process that is summed up in the organization’s tagline: “Dignity. Respect. Choice.” It’s spelled out even more clearly in its statement that “Unity serves residents in need by providing essential services that offer them choice and preserve their dignity and self-respect.”

That’s reflected at Unity’s Grocery Distribution Center, where its clients have the opportunity to shop in a store-like setting for groceries that support a healthy and well-rounded diet and to pick up other household necessities, personal care products and clothing at no cost.

But times are changing and so is Unity, Wasserman said.

“With the backdrop of the pandemic, some of the ways in which we do what we do have shifted,” she explained. “The pandemic just reinforced that we have to be responsive to our clients’ needs, not what we thought they were, but what they really need.”

So, when it became clear that the decades-old model of having clients come into the store to shop excluded some of its clients, Unity and its partners developed Unity Shoppe Delivers to meet those needs, too.

“We discovered that there is a very large swath of low-income people who may not have access to a vehicle, those who are immunocompromised and people who are in multi-aged households that don’t have the capabilities to come to us,” Wasserman said. “Now, we are able to deliver their customized groceries and essentials to them so they can still receive our services.”

What has also shifted in the wake of the COVID crisis is an increased demand for services via a spike in the number of agencies that vet and refer people in need to Unity, Wasserman said.

“When an agency such as a hospital, or social service agency, schools, religious institutions, or community center — 308 in all — sees someone or a family in need, they refer that person to us so they can get services. What’s happened since COVID hit is that the list of referring agencies has grown and now even includes organizations like law firms who work with low-income clients. That’s something that’s brand new.”

Among the other upgrades at the organization in the last year is a new digital and automated inventory program to help Unity manage its resources and keep track of the quantity of foods and other goods coming in and going out.

“We count every client who comes through the door,” Wasserman said. “We count what they took off the shelves so we can manage the depletion and know how much we need to put back on the shelves.”

The more accurate info made Unity realize that limiting its clients to only one visit per month wasn’t meeting the need, especially during the pandemic, so in addition to the new delivery service, clients are now allowed to come twice a month if necessary.

“We don’t want our clients to rely on us for services,” Wasserman said. “We’re here as a safety net when they hit hard times and most only come six to nine times a year. But with the pandemic, that need is growing.”

Wasserman pointed out that with the pandemic still not defeated — and the Omicron variant looming ominously as winter weather creeps in — the area might be headed into another cycle of people getting sick and families needing help.

“The ripple effect on people who are low income is significant, and we want to be here for them.”

So even though the wrapping paper from Christmas presents might still be in the recycling bin, it’s a good time to consider supporting Unity Shoppe again, whether it’s through financial gifts, donations of food and new clothing, or joining the community of almost 2,000 volunteers who come through Unity’s doors every year.

“The need is year-round and every day,” Wasserman said. “This is exactly the time frame when we need support, for people to remember that we’re still here serving that need.”