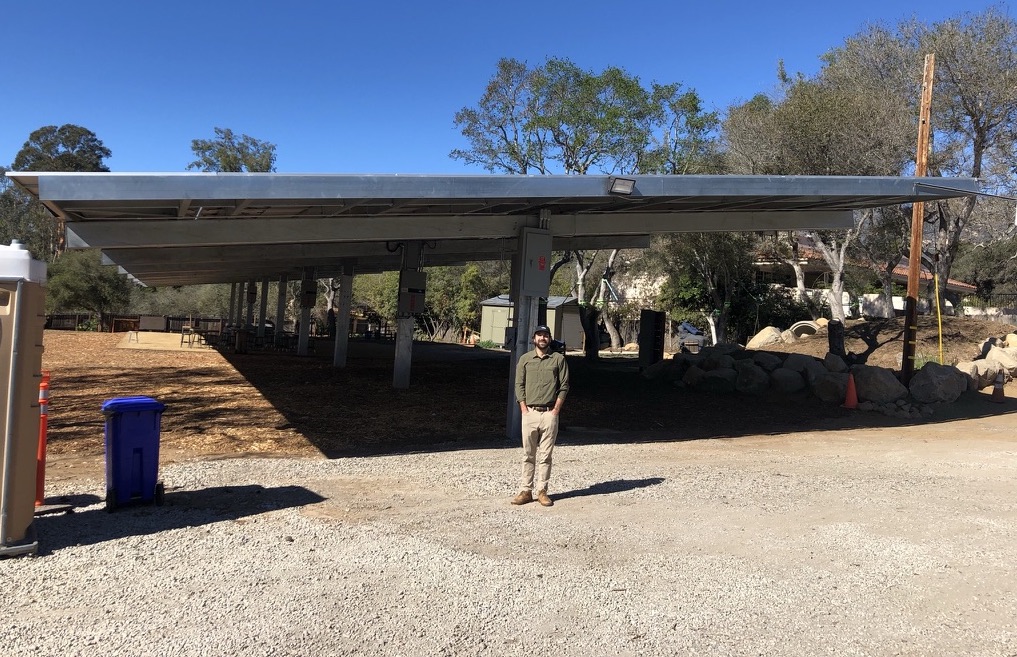 Last summer, just a couple of months before Montecito Journal’s 2nd annual The Giving List book was published, Clean Coalition’s work to stage a Community Microgrid in Montecito – a first step toward establishing renewables-driven energy resilience for the vulnerable area – was still largely in the planning stage. The goal to establish individual Solar Microgrids at three critical community facilities was still just that – a goal.

Fast forward less than six months and the first of those microgrids is not only constructed but also online and operating at Montecito Union School (MUS), providing a clean local energy resource that drastically reduces carbon footprint and ensures the ability to keep the lights on and serve as the primary emergency sheltering site in the event of a catastrophe that knocks out Edison’s power lines.

It’s a tangible and concrete consequence of the Clean Coalition’s Montecito community microgrid initiative, said Craig Lewis, the founder and executive director of the nonprofit.

“It’s been commissioned and it’s fully operational, so it’s pretty exciting,” Lewis said, quickly pointing out that in addition to furthering climate action goals and providing a measure of energy resilience in the event of emergencies, the structure also serves a third purpose. “It provides shade for the kids. There’s little lunch tables underneath the canopy where they can gather. Obviously, it’s a very significant solar installation, but it’s cool that it provides a lot of comfort and shade to the kids.”

The MUS solar microgrid actually operates at what’s called Net Zero for the campus, Lewis explained, with the structure providing more energy than the campus needs during the daytime thereby pushing extra energy out to the grid and pulling energy back in during nighttime use. On average, the solar array is set to provide as much energy as the campus uses over the course of the year.

That formula for clean, renewable, safe, and independent energy in the first stage of the Community Microgrid will next go online at Montecito Fire Protection District (MFPD) headquarters and primary fire station, an even more critical site that houses the majority of Montecito’s firefighting resources.

“Construction is supposed to start any day as a big solar parking canopy and take less than a month, so it will also be functional very soon,” Lewis said. It’s another step in a plan that came into focus in the wake of the Thomas Fire and Montecito debris flows four years ago that came perilously close to burning down the only transmission lines into the region known as the Goleta Load Pocket, which would have plunged the area into extended darkness.

Clean Coalition is also leading the charge on getting solar into 14 of the Santa Barbara Unified School District’s sites, three of which are ready to go and awaiting only a final electrical approval to start providing energy to their campuses. One in particular fills the nonprofit’s ED with a lot of pride: the solar shade structure on the playground at Adams Elementary.

“That’s where I went to school in my early days, and I can still remember how this playground used to be a shade desert. You’d be out there just getting baked by the sun,” said Lewis, who grew up in Santa Barbara, moved away after high school for college and career and returned in 2018 right after the fire and flood to focus on bringing renewables-driven resilience to the area he loved in his formative years. “That’s when I realized that the Santa Barbara region is super grid vulnerable and needed some creative solutions. I wanted to make sure that my hometown has the kind of protection it needs. I’m fighting to get that for every community, but definitely my hometown.”

Lewis and his organization had a lot of help in getting the Santa Barbara Unified School District project approved, with special credit going to what he called Clean Coalition Champions school board member Laura Capps, philanthropist Sara Miller McCune, and former SBUSD superintendent Cary Matsuoka, plus an honorable mention for Rinaldo Brutoco, a long-time energy visionary and Clean Coalition collaborator.

But despite the SBUSD’s and MUS’s shining example, much more work is yet to be done here in town as well as around the state to ensure renewable-energy resilience. Which is why Clean Coalition still needs funding and support to continue its work of providing the vision to get parties aligned in the goal and motivation to actually move forward with the solar microgrid projects as well as facilitation with technical, feasibility and implementation aspects as well as advocate for changes in rules and regulations that can limit the viability of projects.

“We need funding to move our Goleta Load Pocket Community Microgrid forward,” Lewis said. “What we need altogether is fifty Santa Barbara Unifieds, places like City College and out at UCSB, and at a bunch of large commercial properties out near the airport. Every dollar goes to facilitate these solar and storage projects that will get us to the full regional solar-driven resilience that we’re ultimately aiming for. Every project gets us closer to that magic number of megawatts.”

The Clean Coalition is a nonprofit organization whose mission is to accelerate the transition to renewable energy and a modern grid through technical, policy, and project development expertise.

Transitioning to renewable energy is critical to fighting climate change, and maximizing local renewable sources makes communities resilient. While our Santa Barbara region is incredibly special, the grid is alarmingly vulnerable to natural disasters. Our family foundation has supported the Clean Coalition for the past decade. The organization’s leadership, vision, and initiative has demonstrated that clean energy innovations can benefit our local region and also serve as a model for communities across the country.

Schools are vital for educating our children in safe and healthy environments, and they also provide refuge to the broader communities in times of need. It has been a pleasure to work with the Clean Coalition to get Santa Barbara Unified schools primed for the indefinite resilience delivered by Solar Microgrids, along with tremendous economic and environmental benefits. The Solar Microgrids facilitated by the Clean Coalition are state of the art, and I am thrilled that these will show the way for schools throughout the region and well beyond.

Expanding the Reach of Clean Energy

Our donors are stewards of the environment who are bold and forward-thinking. Our donors are leaders who care for their neighbors and invest in future generations.

Last year the Clean Coalition needed $250,000 to support our efforts throughout the Santa Barbara region. This year we are asking for $500,000 to expand our reach to North County schools and critical community facilities throughout the Central Coast over the next two years.

Funding will go towards the salaries of those conducting studies and dealing with regulatory policy at the state and local levels. Policy innovations that govern interconnection and Community Microgrids are particularly vital to unleashing clean local energy, and the Clean Coalition is working diligently to create the conditions for more solar-driven microgrids and the economic, environmental, and resilience benefits that come with them.

Many more renewables-driven microgrids are required to reach our goal of total energy resilience, and you are important to making this happen.