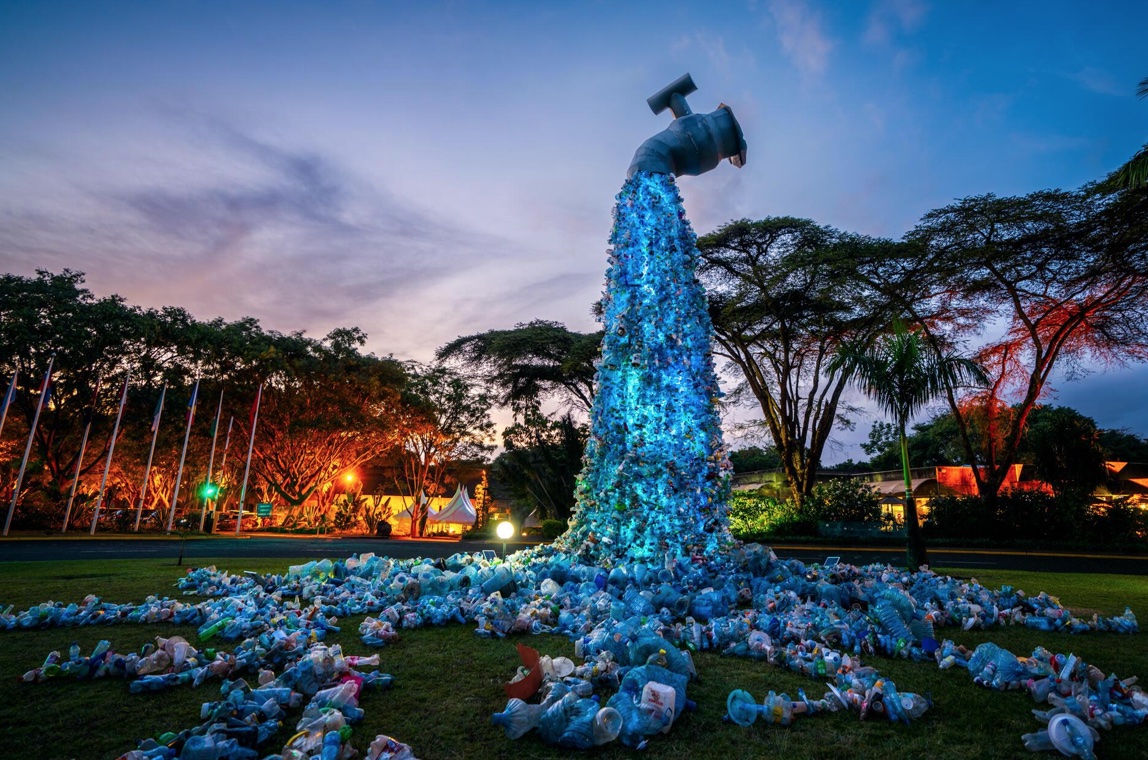 In what is being heralded as a historic win for advocates working to tackle the plastic pollution crisis, parties to the United Nations Environment Assembly (UNEA 5.2) have agreed on a mandate to negotiate a legally binding treaty addressing the full life cycle of plastics, from production to disposal.

Over 1,000 civil society groups, 450 scientists, one million individuals, and numerous governments called on the UN to commit to negotiating a treaty that is legally binding and covers the entire life cycle of plastic—from extraction to disposal.

As 1,500 delegates from 193 countries convened at the United Nations Environment Assembly (UNEA 5.2) this week in Nairobi, Kenya, they were greeted by a stunning spectacle—a giant plastic tap. The 30-foot-tall art installation, a recreation of an earlier project by artist/activist Ben Von Wong, was assembled and presented in collaboration with the Human Needs Project, which supplied thousands of pieces of plastic from Kibera, Africa’s largest slum, located less than 10 miles from where the delegates convened. Over 100 jobs were provided to underserved local communities who participated in the art installation’s assembly.

The visceral image of a massive plastic tap spewing plastic pollution was especially relevant for the UNEA meeting, where world leaders discussed the creation of a mandate for negotiating aGlobal Plastics Treaty, which would provide the first comprehensive global agreement on plastic pollution—a crisis that affects the entire planet.

Individuals may continue to sign on and encourage world leaders to support a bold & binding global plastics treaty that covers the entire life cycle of plastic.

One Million Voices Represented at UNEA

On March 2, 2022, organizations and activists from the Break Free From Plastic movement, on the ground in Nairobi, delivered the message that more than one million people have signed onto petitions calling for a legally binding global plastics treaty that covers the full life cycle of plastic. Others sent the message from afar.

Their collective message, captured in Von Wong’s latest work of art, is that the conversation around plastics is too often focused on false downstream solutions like clean up and recycling—ignoring the fact that most plastic cannot be recycled and ends up incinerated, in landfills, or in oceans and waterways. These false solutions, which have been propagated by the fossil fuel industry for decades, blame the consumer for an inability to clean up a product that never goes away. The real solution and opportunity is getting plastic production back under control by making sure we #TurnOffThePlasticTap. The Global Plastics Treaty is an opportunity to do just that.

The negotiation of the treaty will continue for the next two years.

Plastic Pollution Coalition will host a webinar on March 16, 2022, with advocates who were on the ground in Nairobi at  UNEA 5.2, to discuss the developments there and how the process will now unfold.

Ben Von Wong’s work lies at the intersection of fantasy and photography and combines everyday objects with shocking statistics. His art has attracted the attention of corporations and NGOs alike and has generated over 100 million views for causes like ocean plastics, electronic waste, and fashion pollution. Most recently, he was named one of Adweek’s 11 content-branded masterminds. He is also the host of the Impact Everywhere Podcast and a creative advisor for the Ocean Plastic Leadership Network and the Sustainable Ocean Alliance.

Plastic Pollution Coalition is a growing global alliance of more than 1,200 organizations, businesses, and thought leaders in 75 countries working toward a world free of plastic pollution and its toxic impact on humans, animals, waterways, the ocean, and the environment.

Plastic Pollution Coalition has made a very large impact in a relatively short amount of time, overcoming huge obstacles including governments, legal systems, and corporations, and has turned the tide on plastic pollution awareness. Working tirelessly at the local, national, and global levels to effect real change for environmental justice, PPC is eliminating the use of single-use plastic, and is a dedicated and effective beacon for our local communities.

Flipping the Script on Plastic’s Place in Our World

In 2022, the Coalition will be working with leaders within the entertainment industry to encourage the storylines of popular films and television to include messaging that moves the nation and the world away from single-use plastics towards reusables and refillables, and a plastic-free, more just, equitable, and regenerative future.

The coalition seeks $100,000 to expand this campaign. And, for larger donors, Co-FounderJulia Cohen says there are opportunities to dramatically expand the organization’s lean $2 million budget.

“Imagine what we could do with double that,” she says.