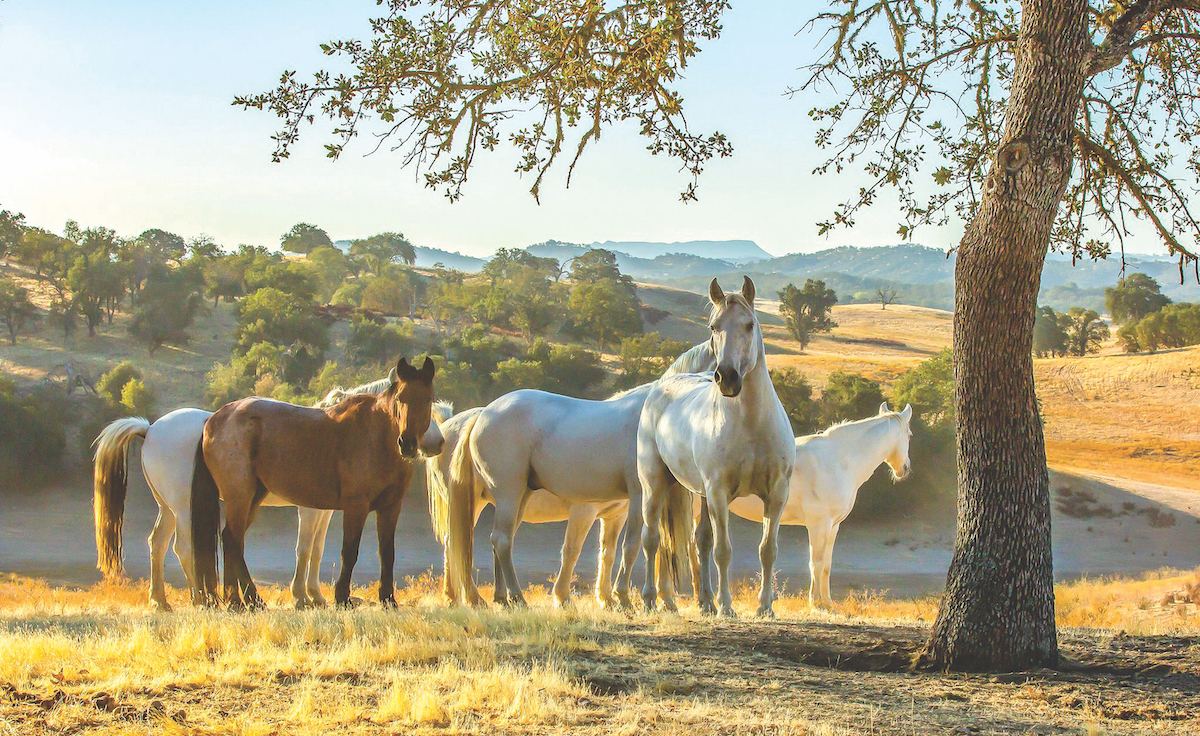 Mustangs from Montana that were rehabilitated at Redwings

Back in 2006, the year before horse slaughter in the U.S. ceased for good, the last three such stateside slaughterhouse facilities killed more than 100,000 horses for human consumption, shipping the meat overseas. Even with those facilities shuttered, approximately 75,000 American horses are still shipped to their deaths in foreign slaughterhouses every year, although the total number of unwanted horses is far larger.

Sara Ruggerone, the Equine Care Manager at Redwings Horse Sanctuary in the rolling hills of Paso Robles, knows that at best she can only save a tiny fraction of them even with the sanctuary’s 140-acre spread. Operating on the front line of one of America’s most heartbreaking but little-known tragedies, Ruggerone focuses on rescuing a few of the ones she hears about in California, those suffering the most from neglect or abuse – and her heart soars when she’s able to share a success story like William’s.

The beautiful horse came to Redwings via Tulare Animal Services, which had received a report that the animal was tied on a 30-foot chain in the middle of a field in scorching 100-degree heat with no food or water. When a passerby reported this situation to Tulare Animal Services, the investigating officer was stunned to find William completely emaciated having used up all his body fat and muscle just to stay alive. He was covered in fungus, his hair was falling out in huge clumps, his hooves were in terrible condition, and he had a weak heart.

Although Ruggerone receives as many as 30 requests to rescue someone’s horses in a typical week, even when the sanctuary is at capacity, there was no choice but to take William in and see if Redwings could restore his health.

“The service department immediately seized him for neglect, but they’re not set up for long-term care or rehabilitation of horses,” Ruggerone explained, “and even for us it was a challenging process. The re-feeding process on a starved horse is very critical because you can actually kill them if it isn’t done correctly.”

William was put on a very strict diet where he was fed small quantities of food every couple hours, and nursed back to health by the Redwings team, with Ruggerone crediting the horse’s own willpower for his rapid improvement.

“When we got him in, he had no energy to do anything. There was really no spark in his eye, he looked dull and listless, and everything that he did was exhausting to him because he had no reserves,” she said. “But he had a very strong will to live. He went all the way up to a Body Score 5, which is considered ideal, in just six weeks – and the transformation of his personality was even more amazing. In less than a month and a half he was galloping and frolicking through his pastures to the point where sometimes he was even hard for us to catch because he was having such a good time, just kicking up his heels and loving life.”

Redwings Horse Sanctuary is a permanent sanctuary for more than 70 rescued horses or various breeds, sizes, and ages, and also annually accommodates about 15-20 that are rehabilitated and then adopted out to carefully screened new owners. The nonprofit also serves to educate people about the widespread problem of horse abuse through tours and outreach programs that have expanded since its 2020 move from Monterey County to its new Paso Robles facility.

“Unless you’re in the horse community or the horse industry, you probably don’t realize all the different reasons why a horse ends up in a bad situation,” Ruggerone said. “Abuse is actually a relatively small part. It’s a lot more about neglect, which is usually unintentional, because people may not understand what it means to take care of a horse appropriately. Or their situation changes and they can no longer care for them. But a horse isn’t so easy to adopt out like a dog, and they usually live 10 or 15 years longer than their ‘useful years,’ although we don’t like that term.”

Their new location, near a population center, should help expand Redwings’ sphere of influence, explained Linelle Soxman, Redwings development officer and the secretary of its board of directors.

“Our goal is to create partnerships with school districts, internships with Cal Poly, just really reach out and be an education and destination center as part of the community,” she said. “Now that we’re settled in, that is definitely something that we are working towards.”

Redwings welcomes tours that are booked in advance, and has already hosted Girl Scout troops, a preschool class, and even people from long-term care facilities, Soxman said.

“It was quite a moving experience to see people with dementia interacting with these horses, and watching how the horses seem to have a sense of who they’re with and behaving very gently. We’ve talked about doing some more formal horse therapy in the future. We have a lot of big plans.”

Soxman states Redwings’ rescue program is largely funded through public donations. People can “sponsor” a horse for as little as $50, make donations to pay for hay, farrier visits, and dental work, or contribute thousands or more toward the capital campaign, and give in any number of other ways.

But, she said, benefactors willing to offer sizable and sustaining gifts would be necessary to bring such ideas as a horse therapy program or even a collaboration with the Paso Parks and Rec department into fruition.

In the meantime, there are more horses like William who need Redwings’ loving care, even if there are thousands more out there that Ruggerone can’t reach.

“We know we can’t rescue the entire world of neglected and abused horses, but we change the entire world for that one horse that we do take in,” she said. “We just focus on making a huge difference in each individual animal’s life, and hope that if everyone shares that mission to save these horses, then together, eventually we make a difference for that larger number.”

Our mission is to eliminate the causes of equine suffering through education and community outreach programs, rescue abused and neglected equines, and provide permanent sanctuary or selected foster homes for those equines.

Marilyn and I have been associated with Redwings Horse Sanctuary for over twenty-one years. We started to support Redwings shortly after it was founded and have served as volunteers, officers, and board members. We have visited the sanctuary to view with compassion the horses who had been rescued from dire situations and rehabilitated and restored to good health.
“We also helped in the relocation of the sanctuary to Paso Robles, California. The wonderful care given to the animals by the staff and volunteers of Redwings has been the driving force in our continuing to support the mission of the organization. I am sure the new facility will enhance the care of the animals and we wish Redwings continued success.

Paso Here We Are

Prior to moving to its new spread in 2021, Redwings Horse Sanctuary led a capital campaign called “Paso Here We Come” to pay for its new permanent facility. Even though Redwings has arrived in Paso Robles, the fundraising campaign continues with a target of $1 million. “Now that we’ve completed the move, we expect to have additional volunteers and to be able to offer more guided tours and educational outreach to the public. With our new proximity to the San Luis Obispo County community, we anticipate more interest in Redwings, which hopefully turns into more fundraising support,” says Linelle Soxman, a board director.