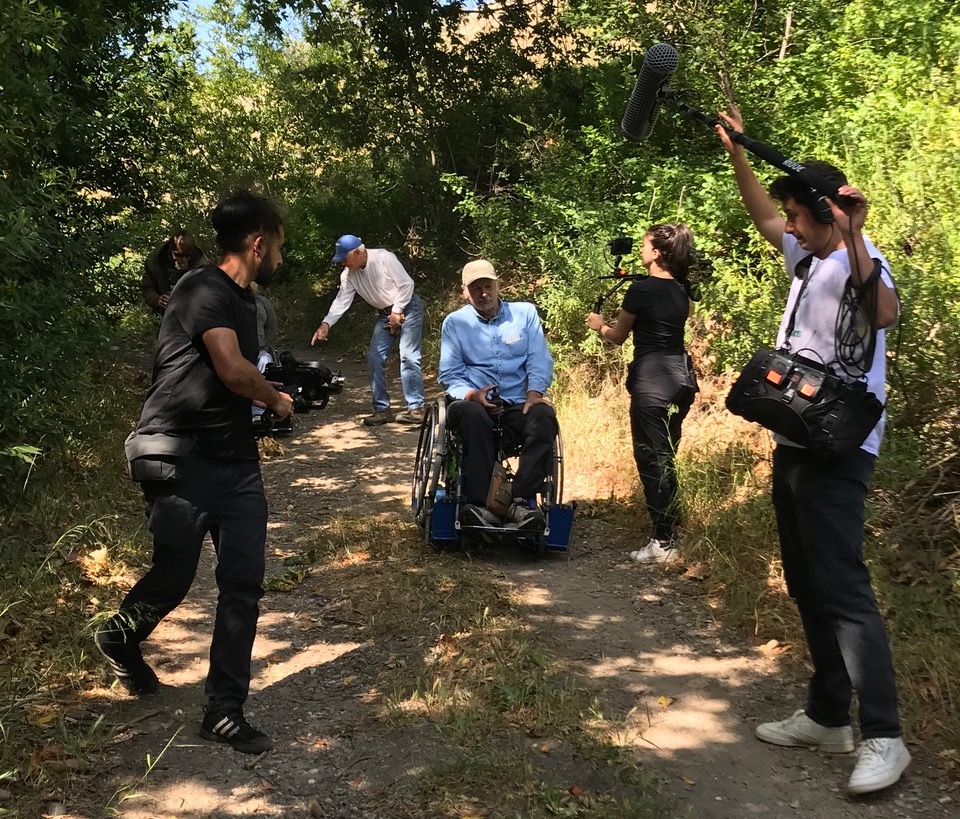 At the Arroyo Hondo Reserve, filming "The Accessible Outdoors" are L to R: Francisco Lopez, Steve Schultz in wheelchair center and Mitchka Saberi while Aidan Mastrogiorgio is on sound with the boom mic. Lopez and Saberi are the principals of Golden Cage Films. NatureTrack Foundation served as co-producer with them. Dennis Beebe is the man in far background, a docent with NatureTrack, helping the other wheelchair user with the new Freedom Trax device. (Photo Credit: Mo McFadden)

“We’re thrilled beyond belief to have our film screen so close to the home base of NatureTrack in Los Olivos,” enthused the Golden Cage filmmaking team Mitchka Saberi and Francisco Lopez along with Sue Eisaguirre who founded NatureTrack. Sue was the protagonist to getting the film rolling. The Accessible Outdoors (TAO) got the nod it was accepted as part of the 28th SLO Film Festival and will screen in person on Thursday, April 27 at the Downtown Center Cinemas at noon. Playing with TAO in person are The Journey and Someone Will Assist You Shortly to make up a tidy 40-minute sitting. From May 1 – 8 it will be part of the virtual SLOFF with all 121 films. The Accessible Outdoors is one of eleven titles in the Central Coast Filmmakers Showcase available anytime you want to watch. “Catch this heart-warming and eye-opening film about the progress being made when it comes to making nature accessible to all,” noted Eisaguirre. Filmmaker Saberi, along with Eisaguirre and production team member Quinnolyn Benson-Yates, are confirmed to attend the April 27 screening, so far. The 15-minute short documentary received a Silver Award at the Hollywood Independent Filmmaker Awards & Festival. It received Best Documentary Film from the Oregon Short Film Festival and an Honorable Mention from British Columbia Environmental Film Festival.

In the release from SLOFF it noted, the 2022 film lineup will feature 121 presentations, including 32 feature films (ten narrative, 22 documentary), 77 short films and 12 music videos. San Luis Obispo Film Festival Director Skye McLennan said, “Returning to the theater is something all of us at the film festival have looked forward to, now, we can hardly believe that moment is almost here. Programming the best films available to us and making sure we brought back the signature events like Surf Nite our SLO Film Fest built its reputation on. We cannot wait to welcome everyone back and start screening our movies!”

This 28th edition of SLO FF is the first local film festival to screen it since its’ debut at NTFF in 2021. Tickets for the screening of The Accessible Outdoors + two more, are $15 general or $12 student/film society and available online here.

Check out the full schedule of films for the 28th San Luis Obispo Film Festival here:

NatureTrack is a 501(c)3 non-profit which provides outdoor docent-led field trips during the usual school day for Santa Barbara County children at no cost to the schools or students, utilizing local trails and beaches throughout north and south county. NatureTrack’s mission is two-fold: to encourage students to embrace our natural world with respect and wonder, inspiring them to be stewards of our natural resources, and prepare school-aged students with the attitudes, leadership skills, and habits for lifelong learning. Founded in 2011, more than 25,000 students have had a chance to experience a NatureTrack docent-led outdoor field trip.

Recently NatureTrack expanded its’ mission of connecting kids to nature and is now connecting people who use wheelchairs of all ages to get out into nature using Freedom Trax. This device quickly changes a manual wheelchair into a battery powered, all-terrain vehicle which can easily traverse sand and trails. Now NatureTrack docents, students, and teachers who use a wheelchair can join classes on nature trips using Trax. https://naturetrack.org. NatureTrack is expanding its’ reach up to San Luis Obispo and down to Ventura County with the Trax program. Thanks go to the grantors including: UCSB’s Coastal Fund, California State Coastal Conservancy, Parks California ‘Route to Parks’ grant and the Coastal Resource Enhancement Fund.

NatureTrack is a 501(c)3 non-profit whose mission is to provide outdoor field trips for school-aged children at no cost to the schools or students.

We both know it is vital for our young generation to be out in nature and experience what nature offers. Seeing the excitement on students’ faces and their reactions to natural discoveries is always a joy. We enjoy being out on the trails and beaches, sharing nature at the moment with future stewards of our natural world.

For the Love of Nature

Transportation costs have increased significantly. In order to keep NatureTrack outdoor field trips cost-free for everyone, we need your help. Every donation you make will help us connect more kids and wheelchair users to nature.

$1,000 – Pays for 15 students to take a field trip (including transportation)

$2,500 – Pays for 35 students to take a field trip (including transportation)

$5,000 – Pays for 70 students to take a field trip (including transportation)

PRICELESS – Becoming a NatureTrack volunteer! Join us. We have as much fun as the students!