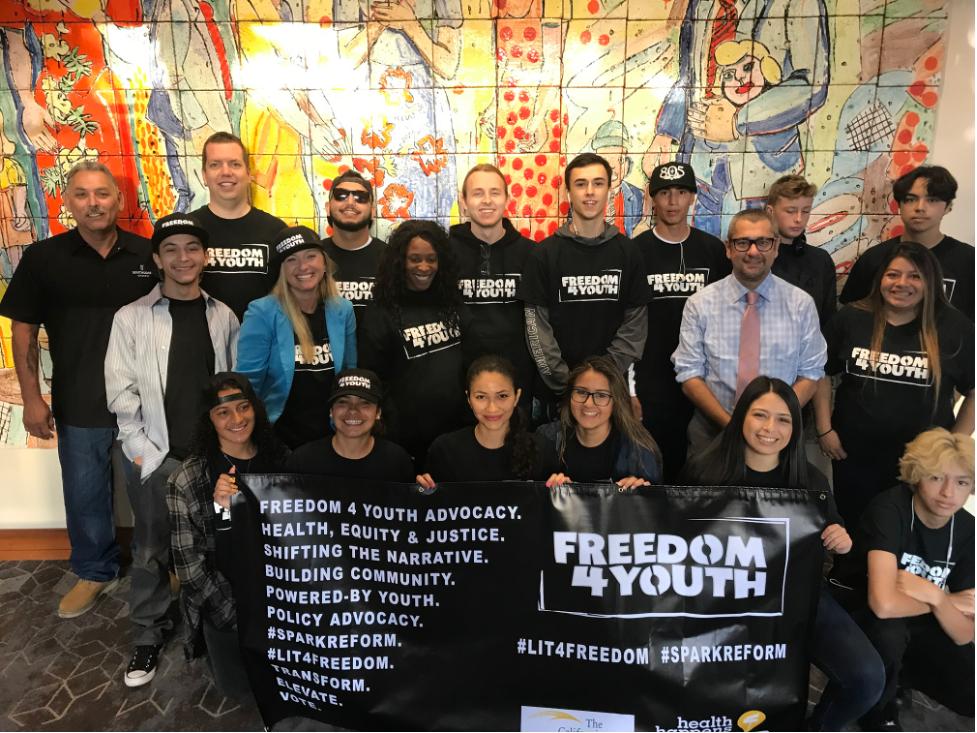 Freedom 4 Youth at the State Capitol

Freedom 4 Youth Development Director Dylan Griffith likes to toss out a quote his mentor once told him that sticks in his head: “Change occurs at the speed of relationships.” It’s a motto that defines and drives the barely 11-year-old nonprofit that empowers youth within and beyond the juvenile justice system to change their lives through leadership and other programs.

“We’re all about prioritizing relationships and finding common ground,” Griffith explained, noting that nearly all of the organization’s staff has been impacted or directly involved in the justice system themselves in some way. “For one of our people to immediately be able to say, ‘Oh, I’ve experienced something along the same lines as what you’re going through really goes a long way. There’s an automatic common ground. There’s a foundation to build a strong relationship and that’s how change occurs.”

The numbers bear out the effectiveness of the approach, noted Griffith, who himself was involved in the justice system for several years as a youth, but benefitted from heavily reduced charges, access to mental health services, and probation instead of incarceration.

It has been 13 years since Billi Jo Starr, a Santa Barbara High School alumna who later earned a PhD in Education from UCSB, first brought a Toastmasters-style curriculum to the local juvenile detention facility Los Prietos Boys’ Camp. Freedom 4 Youth – which became an official nonprofit in 2011 – can count more than 2,000 previously incarcerated individuals on probation who are now alumni of its custom-tailored leadership and education programs. Many of whom in turn have gone on to support other youths who are still in the juvenile detention system. F4Y’s staff and volunteers have logged more than 26,000 hours with youth in Santa Barbara County Probation, Child Welfare Services, and the United Boys & Girls Clubs.

The good news is that the programs work, as Freedom 4 Youth can boast that participants have a recidivism rate of about half of those in the general detention system. And now that the county is potentially closing Los Prietos Boys’ Camp – news that was reported less than 24 hours before our conversation with Freedom 4 Youth – the nonprofit is anticipating an even greater need for community-based programming and alternatives to incarceration given that the only other confinement option is the maximum-security prison in Santa Maria.

“That would mean that they send everybody to our juvenile hall system in Santa Maria, which would not benefit our youth at all,” said Eddie Perez, Freedom 4 Youth’s manager and chaplain, who was previously incarcerated as a youth offender. “Putting them in a higher security prison setting means they will get more institutionalized rather than being allowed to be outdoors and interact and be able to still know what it’s like to have a normal life.”

Fortunately, given its success and explosive growth – Freedom 4 Youth is already outgrowing the facility near Goleta Valley Cottage Hospital that it only moved into in 2019 – the organization has launched its two-year expansion program that has become a bigfocal point of its operations, Griffith said. The plan includes taking over two office adjacent office space, ultimately tripling its square footage.

“That would let us be able to serve over half of the population of people who are actively either incarcerated or on probation supervision in our entire county, more than double our current capacity,” he said.

The expansion would incorporate the building of a commercial kitchen to allow the organization to embrace more of a social enterprise model, with a catering and meal delivery service run directly through Freedom 4 Youth and staffed entirely by people who were previously incarcerated. “They’d be making the food, doing all the back of house operations, in addition to the front of house service in terms of any kind of private events, meal delivery, or company catering,” Griffith said. “There would be professional culinary training and employment opportunities within Freedom 4 Youth, but also job placement outside of the organization through our wide range of community partners in the culinary industry locally.”

The ideas came about through interaction with its clients. “The vision has been led by people who we serve,” he said. “We’re not making things up as we go, we’re responding to what young people have identified that their needs and goals are, and then creating the space for that to be actualized.”

In addition, the new footage would provide room for a multipurpose/mixed martial arts space, and more space to do educational programming as well as increased individualized service for people who have been impacted by incarceration, he said.

The food prep part would also serve another need, Griffith said. “It would be a way for us to diversify our revenue stream and not be completely reliant on foundation grants and donations. We’d be able to create more sustainability for our organization as a whole while at the same time fulfilling the mission of serving people who are impacted by incarceration.”

In other words, expanding the tentacles of change through relationships – full speed ahead.

As part of our vision to expand services and partnerships, we recently moved into our new multi-purpose Freedom 4 Youth (F4Y) Center, located at 187 South Patterson Ave., Suite A. in Santa Barbara. The F4Y Center fills critical gaps through individualized case management involving families to reduce the challenges of recidivism.

I love Freedom 4 Youth (F4Y). They have been there for me since I was a kid locked up at Los Prietos Boys Camp. Because of F4Y I met my mentor Scott Budnick from Anti-Recidivism Coalition (ARC) and they helped me move to L.A. Now I’m studying film at West L.A. City College and working on my portfolio to finish the Hollywood Cinema Production Resources program. Without F4Y I wouldn’t be where I’m at today. I’m always part of F4Y advocating for youth that come out of the same place I do. Being able to focus on my career and future is a blessing and I’m grateful for F4Y and ARC for always being with me and giving me endless support and opportunities.

Freedom 4 Youth is in the midst of a significant and long-needed two-year expansion project.

Their office is merely 1,360 square feet, shockingly small for an organization of their reach and magnitude. They plan to take over an empty space adjacent to their current office, where they will build a commercial kitchen and begin a catering and meal delivery service fully operated by people who are formerly incarcerated.

It will also house a multi-purpose educational and mixed martial arts space.

The expansion is in two initiatives, split by calendar year. 2022’s goal is budgeted at $713,572, so Giving List donations will be gratefully put towards this expansion.