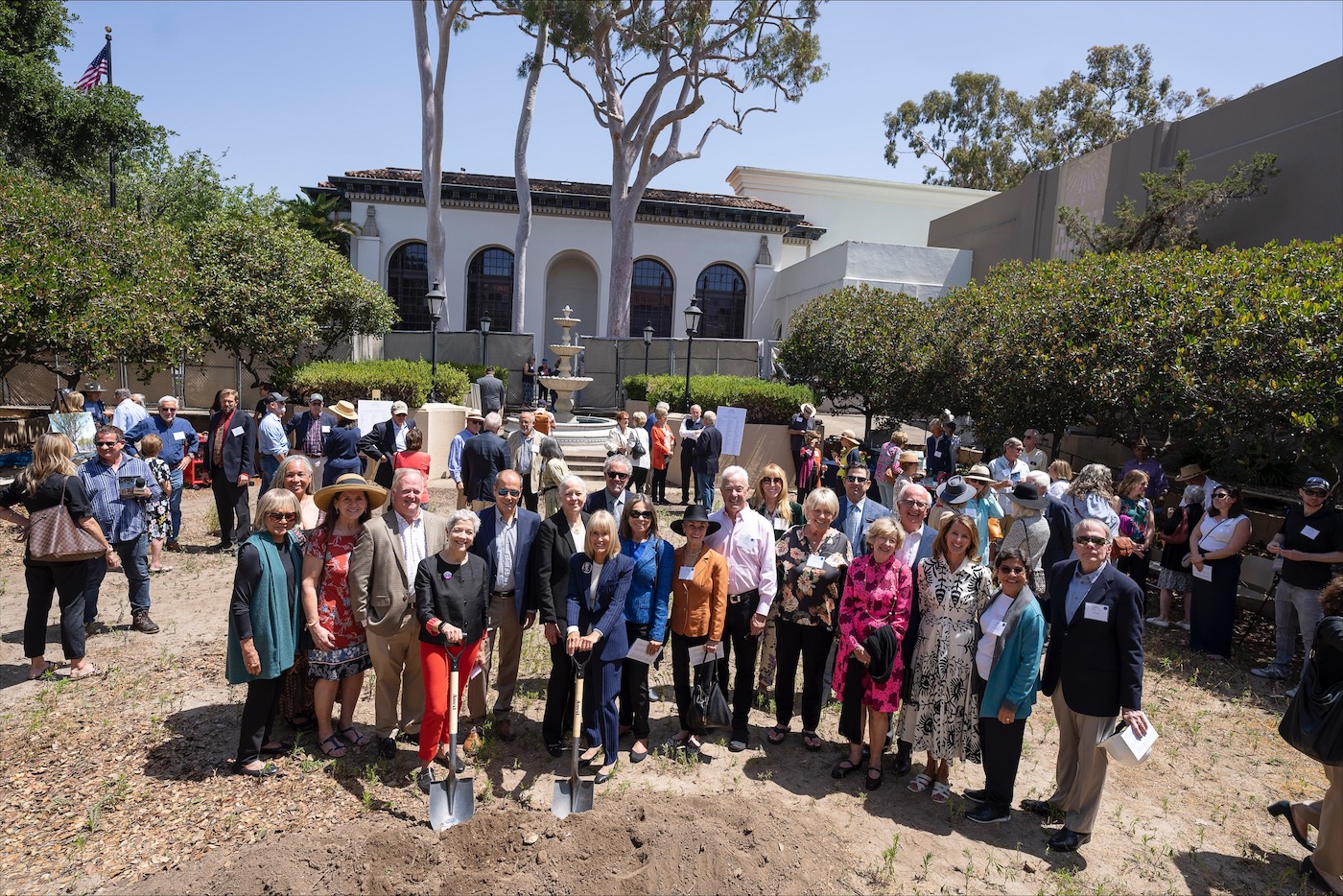 The Library Plaza campaign was successful in raising the $5.4M required to revitalize the historic space

The Santa Barbara Library Foundation’s director Lauren Trujillo is in a celebratory mood.

The foundation’s $5.4 million capital campaign to revitalize the historic plaza at the Santa Barbara Library, a once bustling pedestrian thoroughfare that had fallen into disrepair, has been fully funded. The organization raised nearly 60 percent of the dollars from private contributions – including an inclusive Buy-a-Brick campaign in which community members had the opportunity to leave their own legacy by purchasing a personalized brick on the revitalized plaza for as little as $500.

“We’re just so grateful.” Trujillo heads up the foundation, whose mission is to support the Santa Barbara Public Library by funding large-scale initiatives such as the plaza renovations and its initial campaign a decade ago that resulted in a massive upgrade and expansion of the Children’s Library. “We couldn’t have done it without the support from the community, and from Michael Towbes and his vision for a community space.”

Construction is well underway on the project that will turn the plaza – to be renamed in Towbes’ honor – into a cultural and educational hub in the heart of downtown Santa Barbara, a gleaming new asset boasting drought-tolerant landscaping with permeable pavers and natural sandstone for both the library and other arts and civic organizations to hold classes, concerts, gatherings, and more.

But Trujillo is concerned that, despite the fundraising success, the public may not be fully aware of what’s in store for the space, and why there’s a chain link fence blocking the Anapamu Street access, save for a narrow walkway, just months after similar construction fencing at the adjacent Santa Barbara Museum of Art came down.

“We’re all very excited for the new space, and we want the public to get as excited and engaged as we are,” she said. “That’s why it’s important to update people on the progress of the project and remind them what it’s all about, and why the library isn’t open except for three hours a day for pick-up and drop-off.”

Chief among the assets, Trujillo said, was that the plaza will continue to demonstrate that the library is more than books, with the new facility taking some of the critical programming that happens inside the building – including lots of activities and learning opportunities for kids that grew so exponentially after the Children’s Library expansion that people were turned away – out into the open air, offering more space and more accessibility to more people in the community.

The 10,000-square-foot plaza that spans the area directly behind the Art Museum all the way to Anacapa Street will have three distinct programmable areas including new ones in front of the historic Faulkner Gallery doors, and another in the area that connects the library to the Art Museum and the side entrance to La Arcada Court. “It looked like a big empty swimming pool, the way that the ground kind of sank in at the center there,” Trujillo said. “It was pretty unsafe and more of a delivery truck drop off space.”

Between the three areas, the plaza will accommodate everything from Storybook Hour for the kids, to community meals, civic forums, job fairs, volunteer expositions, theatrical productions, and even concerts from the Santa Barbara Symphony.

“Taking our programs outside is great, but it’s also a community space where the more than 65 nonprofits the library partners with annually can also take advantage of to reach the community with free and accessible events to reach and grow their audiences,” Trujillo said.

She said Opera Santa Barbara, which regularly offered noontime concerts featuring its studio artists inside the public library, but has postponed them during the pandemic, is looking forward to returning when the plaza is ready. Similarly, Drama Dogs, which has brought one-acts and staged readings to the indoor space, can expand its offerings in the great outdoors. The Santa Barbara Film Festival has plans to offer outdoor screenings, UCSB Master Gardens program, and Apple to Zucchini Cooking School, which teaches children, teens, and adults how to prepare delicious, nutritious, and affordable meals made from seasonal and local ingredients, are three more organizations looking forward to participating in the plaza.

“The library is really one of the last places you can go where you don’t have to spend money,” said Trujillo. “It’s open to anyone, all backgrounds, from all walks of life, which is such a beautiful concept. It’s really wonderful to be creating this public square right here because there are really no barriers to this space.”

While the immediate fundraising for the project is complete, the Library Foundation is looking into launching an endowment campaign to help with program sustainability and upkeep at the plaza that might be needed in the future in perpetuity. Those who are itching to donate should feel free to contact the organization to jumpstart the effort.

And rest assured, the foundation is also happy to accept your contributions for other efforts, such as SB Reads 2022, in which the Santa Barbara Public Library invites the community to read and celebrate N.K. Jemisin’s award-winning speculative novel The Fifth Season starting in October as a way for local residents to read the same book at the same time to connect with one another, engage in discussions about issues that matter, and examine the world from viewpoints other than their own. Santa Barbara Reads is funded through the annual support of the Santa Barbara Public Library Foundation.

Other capital improvement projects are in the pipeline, too. But for now, Trujillo and the Library Foundation are taking a pause to reflect.

“We just want to say thank you,” she said.

The historic plaza at the Santa Barbara Library, a community treasure and once bustling pedestrian thoroughfare, is in dire need of restoration. A $5-million project to revitalize the plaza into a cultural and educational hub is well underway. The capital campaign was launched in 2020 and has quickly grabbed donor attention. Last year, the City of Santa Barbara committed $1.115 million. Nearly 85% of the funds have already been raised. In April, the City Council approved a proposal to rename the plaza in honor of the late philanthropist, Michael Towbes, a decision that no doubt bolsters the capital campaign. “We’ve zoomed into this capital campaign and that’s our total focus right now,” says Foundation Director Lauren Trujillo.

Buy a brick and leave a lasting legacy on the new Library Plaza. Your engraved stone paver will be an opportunity to add your name to the future Library Plaza.

All your creativity and hard work that go into finding ways to meet the needs of the community are incredible. We are fortunate to have such a wonderful resource.