St. Vincent’s: A Place Where Lives Change for the Better 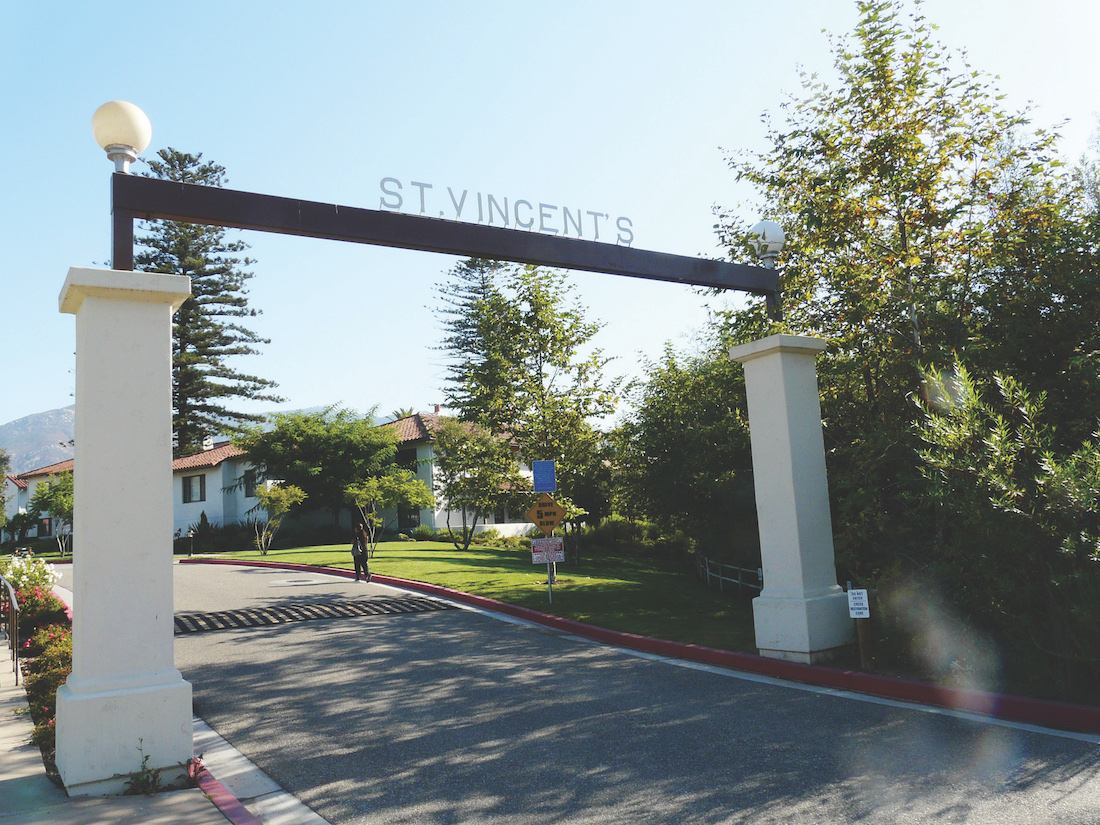 St. Vincent’s is not just a place or an institution. It is Santa Barbara’s longest-running social services organization, woven into the region’s history, all while serving 600 people every day. The campus is named after the French priest St. Vincent de Paul who was the founder of the Daughters of Charity who came to Santa Barbara in 1858.

Above the agency’s gateway is a steel banner that proclaims: St. Vincent’s mission – “Through this gate… life changes.”

Sister Arthur Gordon, vice president of St. Vincent’s mission integration, has been a member of the Daughters of Charity for 61 years. Sister Arthur underscores that her order came to Santa Barbara at the request of Bishop Thaddeus Amat  to build an English-speaking school. They did that, and they also built an orphanage.

Over the course of more than a century and a half, the Daughters of Charity have responded to new needs.

Unlike other religious orders for women, the Daughters of Charity from their founding were not cloistered, and from the very beginning were engaged in serving the needs of the poor. In its time, their foundation signaled something new, even radical. They established hospitals, schools, and homes for orphan children, developed programs to train people for jobs, taught reading and writing, and carried out a prison ministry.

By the time St. Vincent de Paul died in 1660, the Daughters of Charity had more than 40 houses in France. Often, they were the very first women’s order to develop in modern urban settings building orphanages, homes for the elderly, and shelters for the handicapped. Today, there are more than 16,000 members in 90 countries around the world, and in each community, their goal remains the same: to change lives.

They developed a specialized program for exceptional children that continued for half a century, programs for developmentally challenged children, the first day nursery that responded to the needs of working women in the city, and were critical support to the Special Olympics here.

“We trust the people,” Sister Arthur says. “We are advocates for the poor, the homeless, and the marginalized.”

Today, they have three central goals: providing affordable housing for low-income families, early childhood education, and a Family Strengthening Program. They have built at St. Vincent’s over 150 housing units for low-income families and the elderly, and cottages for single mothers. The single moms must either be in school or working.  And as part of the program, the mothers are taught the basics of family finances, are helped to establish bank and savings accounts, all while receiving daycare for their children.

The Family Strengthening Program provides single moms with something that cannot be provided by other social services: a sense of self-worth and encouragement to believe in themselves.

One such mother is Rosalinda, who came to St. Vincent’s with an infant and a toddler, and was struggling to put food on the table. She was a grocery store cashier without career goals.

But, after two years in St. Vincent’s Family Strengthening Program, and with the help of her case managers, her life improved, as did the future for her children. Rosalinda is now a full-time property manager and her daughters are thriving.

“I understand that not everyone has the same story, but what I want to accomplish by sharing my story is to give someone else hope and encouragement,” Rosalinda says. “If you put effort and pride in what you do, you achieve so much in life. It’s okay to reach out for help to better yourself, but don’t expect others to do the work for you.”

There is a humility in the way that Sister Arthur thinks about the needs of the poor.

Her motivation is drawn from the paradigmatic life of Jesus of Nazareth, who treated all people with love and compassion. She acknowledges that we do not have all the answers for the social problems that dog our contemporary life.

But, “the people we serve can teach us a great deal.”

Of course, St. Vincent’s serves people from all faiths and its services are non-denominational.

Even small donations can make an outsized impact. Your $200 donation covers one day of complete services for a mother like Rosalinda and her two children, a home in our cottages, daycare, food, and parenting classes on our campus.

St. Vincent’s is dedicated to strengthening low-income families and seniors through programs rooted in the Social Teachings of the Catholic Church.