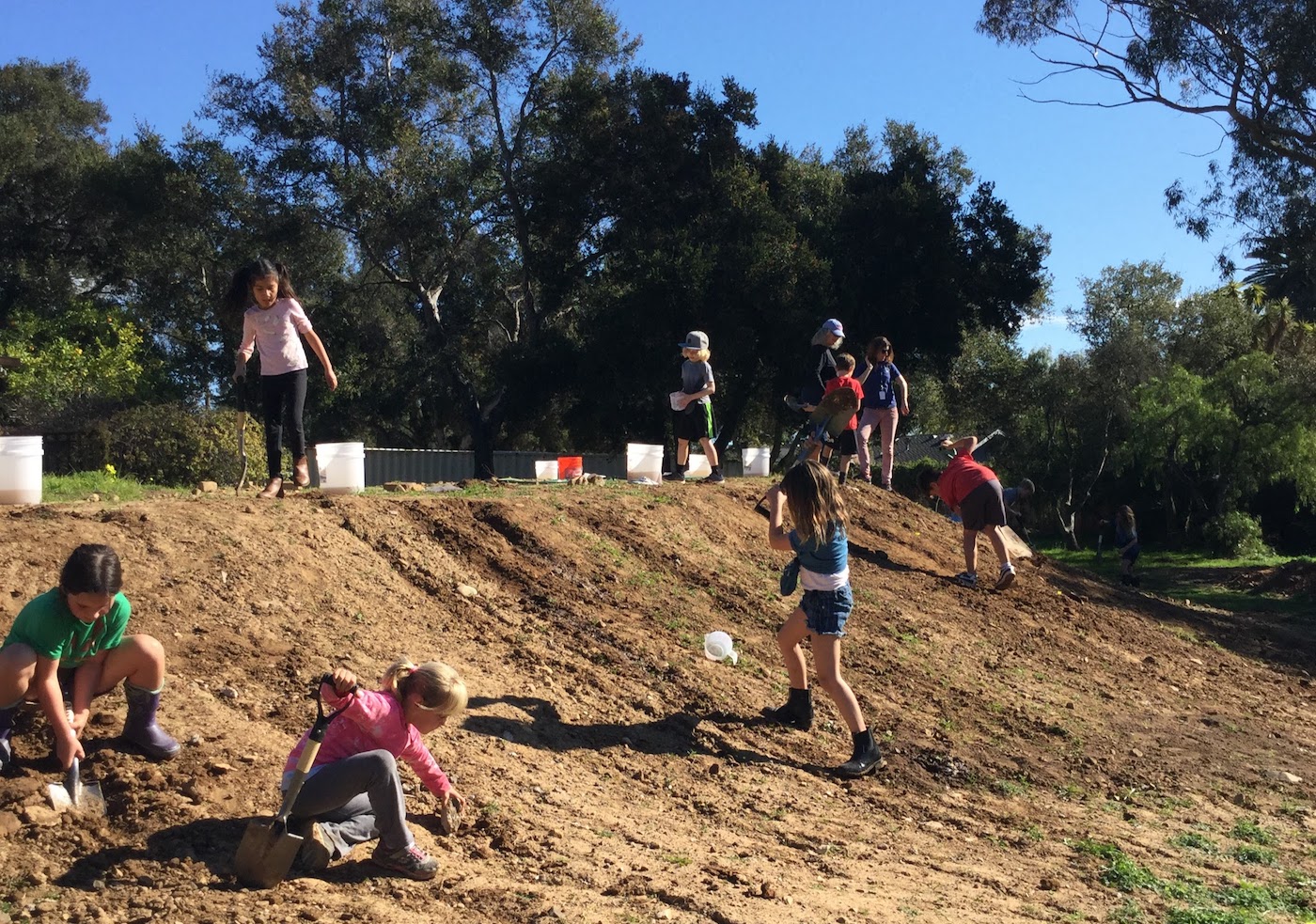 Montecito Union School utilizes the outdoors for both activity and education

Montecito Union School’s Nature Lab, its interactive 2.5-acre space that’s beginning to take shape on the Upper Village campus, has been serving as a learning laboratory even before ground was broken on the project. The students at the enviable elementary school were a big part of the process about how to use the land adjacent to its campus that previously was merely a rental income property, supporting the general fund, but not directly its educational mission.

“It’s all about active learning, about actually making things,” said Anthony Ranii, superintendent of the Montecito Union School District. “The students are helping out in doing the design, doing the research, and actually building things with their hands.”

And the school kids have been heavily involved in the progress at the Nature Lab since the Montecito Journal Media Group’s The Giving List glossy magazine came out last fall.

“There’s been tremendous changes, just tremendous,” Ranii said. “We have a butterfly waystation that our second graders researched, designed, and planted around the area we’re calling our Low Tree House. Our fifth graders learned about how to turn dirt into soil in the vegetable garden, which they designed and built. We now have an enclosure for our 75-pound Sulcata tortoise, and we’ve got six chickens on site.

“We’re in the middle of completing a sensory garden, and there’s the Mustang Corral, which is an outdoor learning area with seating for students. And the Bird and Bear orchard has 30 different fruit-bearing trees and vines, where the students will gain hands-on knowledge about biodiversity, agriculture, the nitrogen cycle — and get to taste what they have grown.”

Exciting stuff, so far, and Ranii said there are much bigger dreams for the space, a 2.5-acre parcel that sits adjacent to the school’s campus, including a water feature to create a riparian zone, installing more raised plant beds so that each classroom can have its own science garden for age appropriate experiments, and outfitting a centerpiece building known as The Collaboratory, which will attract scientists in residence and other specialists to spend time with the students and others.

On the other hand, there’s still a lot to be done, Ranii noted, checking off running electricity to the lab, installing flooring in the buildings, creating paths of travel for students and adults of all mobilities, and, not at all least, bathrooms.

“It’s not the most exciting thing, but we want to truly use this resource not just for our school but for the whole community — to bring in civic organizations like the Scouts, and have other public schools come here for field trips, invite everyone to check out the facility on the weekends and evenings when we might have events with experts so people can learn about how to make natural dyes or working with drought-tolerant and pollinator attractor plants. Completing these kinds of infrastructure work is a prerequisite.”

The larger community aspect partially points to why those who don’t have kids attending MUS might have an interest in supporting the project. But there are more important reasons, ones that might not pay immediate dividends but could make a massive difference down the road.

“Everybody should care that students in public schools, wherever they are, are spending time understanding the complexity of the natural world, because the problems that they are going to be forced to solve come at the intersection of nature and human influence,” Ranii said. “Even if they’re not yours, I would think that you’d want kids to be exploring and understanding this so that when they grow up, they can do that important work in order to keep us all safe and healthy.”

It’s also a matter of math, said Ranii, who was a tutor, teacher, curriculum writer, principal, and professional development trainer before taking on his current administrative position at MUS.

“Every penny you spend on early work in these fields is going to pay off 10 times as much as it might at the undergraduate or graduate level. We need to turn the kids on to these concepts so that this is what they want to study, and it becomes their passion. We have four-year-olds all the way up to age 12 on campus and if we can get these kids knowledgeable, interested, and facile with these concepts, [the value] will just redouble over and over again by the time they’re in the workforce. Money spent early is money well spent.”

That’s where Montecito Union School Foundation comes in as the organization composed primarily of parents — with Ranii as a non-voting advisory member — that serves as its charitable arm. It was MUSF that provided the original seed money to study how to use the land and is part way through a fundraising campaign to complete the project itself. While there’s been quite a bit of progress over the last nine months, the goal posts have also moved.

“It was about $400,000 more that we needed then, but at this point, now that we’ve done more research and understand more about what we’d like to do, we probably need more like $600,000 to do all the things we’ve discussed,”

To that end, MUSF is working with grant writers to secure grants from near and statewide. Foundation dollars can really make a difference in doing this right so that the Nature Lab is a regional resource, Ranii said. But donations don’t have to be massive to be effective, Ranii pointed out. While the Collaboratory’s naming rights are still up for purchase, a gift of $5,000 can secure perpetual naming rights for one of the storage sheds.

“Give us a call,” Ranii said. “We’ve got a lot of opportunities at that level.”

To contact the Montecito Union School Foundation, reach out to President Tara Fergusson at (847) 508-3374.

Montecito Union School District is committed to instilling a love of learning while providing innovative, comprehensive, and supportive learning opportunities, including: a thinking curriculum based on Harvard’s Project Zero; a character program with special emphasis on Habits of Mind; a researched-based approach to instruction in which each grade’s instruction builds on previous learning; robust specialist experiences and a comprehensive arts education; and a whole-child approach to serve as a foundation for success in academics and life.

It’s All About Science

“The Nature Lab provides children at MUS an opportunity to not only advance the cause of STEAM learning, but it also lets them get a little dirty! That’s how you really learn. Our community’s children are our most important asset. Contributing to their education and appreciation of our natural world is a very solid investment.”

Over the next two years, MUSF will build a gathering space called the Collaboratory, a farm, pond, and paths throughout, and is offering naming rights to help them reach their fundraising goal.
2020/21 Foundation President Tara Fergusson believes that “a strong Montecito Union is a strong Montecito”. You can contact her directly at President@MUSFoundation.com or (847)508-3374 to learn more details.