Montecito Bank & Trust: A Bank that Embodies the Community Spirit 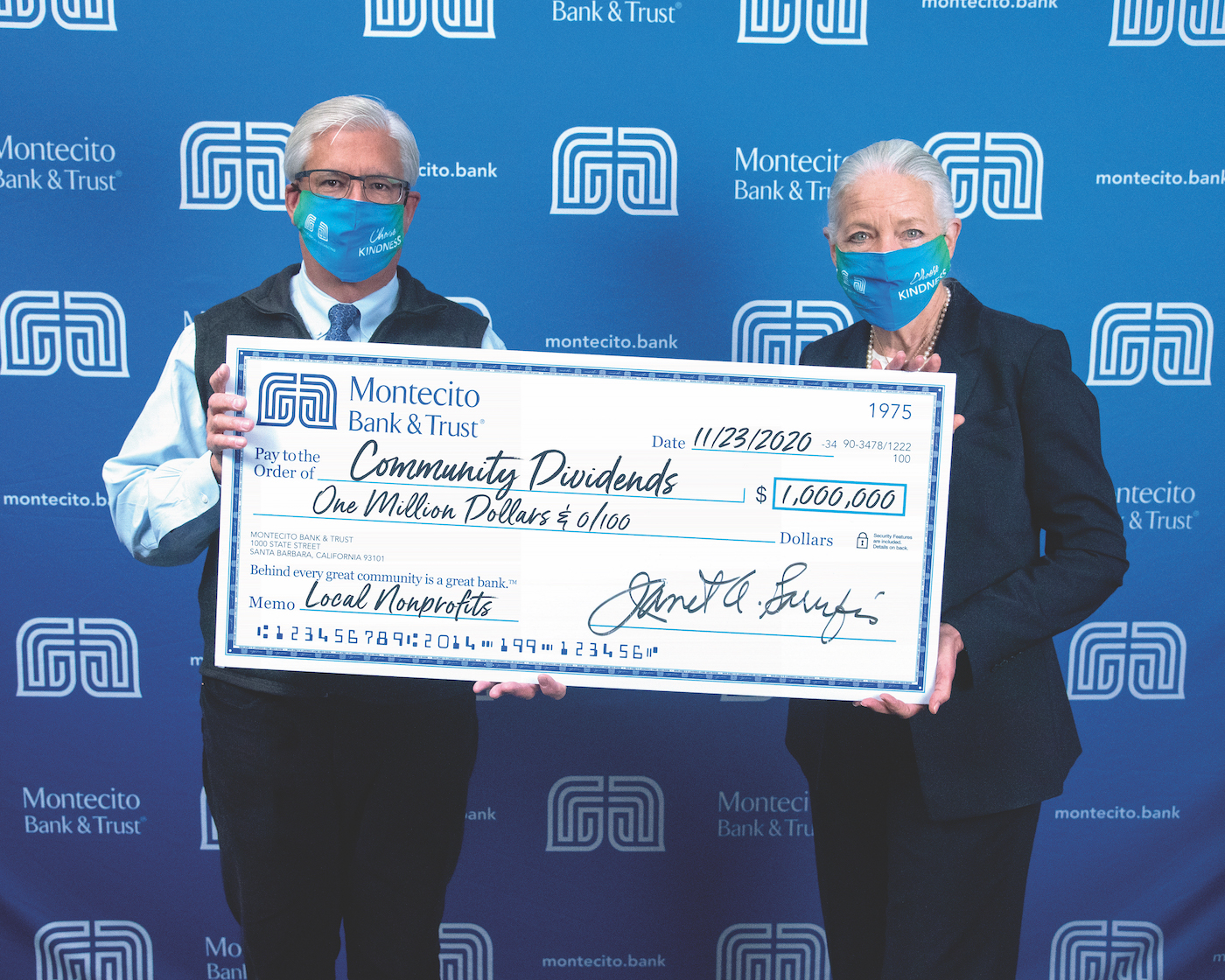 Banks don’t usually spring to mind when one writes about beacons of community trust, good deeds, and hope. But even as politics, pandemics, and polarization cast long shadows across our landscape, one community bank is illuminating the path toward a more hopeful future. Montecito Bank & Trust, bursting with optimism that is a natural outgrowth of the remarkable legacy left by its founder, the late Michael Towbes, continues to evolve every day through its programs, attitude, and remarkable leadership.

Montecito Bank & Trust is at once old-fashioned and futuristic – serving the community faithfully like an old-style town doctor who knows everybody and still makes house calls, while also engaging in forward-thinking, home-grown initiatives like the Financial Literacy and Community Dividends programs. It was there for the community after the 2017 Thomas Fire and the subsequent catastrophic debris flow, and then stepped-up full force in multiple ways during the pandemic. It has helped lead the community in implementing the critical financial elements of the COVID-19 pandemic’s CARES Act and in the arts, food banks, housing, school programs, and multiple other vital efforts – from which the Central Coast area has benefitted greatly.

The bank, which first opened in 1975, has 14 branches and is the largest locally owned and managed community bank on the Central Coast. Beyond the $17 million that the bank has granted out to local communities, its more than 250 associates typically donate in excess of 5,500 volunteer hours every year.

“We are motivated by a simple, yet aspirational vision,” says Janet Garufis, Chairperson and CEO of the bank. “We want to provide a world-class experience for our customers, the community, and for our own associates.”

The bank was founded in 1975 by a group that included one of Santa Barbara’s most famous and effective philanthropists, Michael Towbes, who made his fortune as a California housing developer. As successful as Towbes was as a businessman, his real artistry was in constructing organizations as vehicles for channeling profits back to the community. Towbes, whose dynamic efforts of yesterday continue to define Santa Barbara in many ways, passed away in 2017, but the bank’s leadership has pledged to keep his vision evolving into the future.

“Michael’s vision was what attracted me here,” says Garufis. “It was inspiring to see how totally delighted he was to find he had such a capacity for giving back to the community. It gave him joy every day. That vision and feeling of joy are why I came here, and why I stay. Michael passed that on to us and gave this bank a purpose.”

The bank’s immediate response to the pandemic sharply defines its unique role in the community. After Congress passed the CARES Act (Coronavirus Aid, Relief, and Economic Security Act), banks with Small Business Administration (SBA) programs were deputized to get federal money to help struggling businesses. A big part of that was the Paycheck Protection Program (PPP). When the PPP became available in the spring of 2020, many banks were too confused – or were simply reluctant to get involved with something that didn’t promise much profit – and ended up being of little help to the community. Montecito Bank & Trust, though, lived up to its name and stepped up to support, and in some cases save, many of the community’s businesses and residents. Through 2021, bank associates put in more than 20,000 hours servicing area PPP loans for local businesses, which translated into more than $320 million, keeping many small businesses alive. An estimated 22,000 regional jobs have been saved by the bank’s actions through the CARES Act.

That incredible service – which overwhelmed the bank’s online system, requiring employees to work around the clock to keep up with the demand – was an example of its legendary status as a pillar of community support. But that was only one of a multitude of ways Montecito Bank & Trust works to fortify the community.

One of the more imaginative ongoing efforts by the bank is its Financial Literacy Program. “We teach mostly young students (as well as adults) about everyday finances – how to save, how to balance an account, how credit works, how to buy a car, and other practical things,” says Megan Orloff, Chief Strategy Officer and Executive Vice President. “We didn’t let the pandemic stop us; we immediately began to develop virtual programs so teachers can share these presentations with their students online. We also added our services with students online in real-time so they can us ask questions. We actively work with the United Way and local school districts, and have expanded this program to adults and more recently college students.” It has gained increasing popularity throughout the area. Orloff was hired not only as a communications expert, but to help increase the bank’s “brand identity.” She continues to do that by helping expand how it serves the community, which includes supporting efforts by many of the area’s nonprofits.

“I’ve watched these nonprofits who provide critical services stay incredibly resilient during these times,” says bank President and Chief Operating Officer George Leis. “For example, the YMCA shut down at the beginning of the pandemic, but moved quickly to reopen their gymnasium for childcare. They saw it as an acute need because parents going to work needed a place to drop off their children when schools were shut down. We publicly recognize, support, and applaud these incredible efforts.”

The bank also maintains an internal financial abuse team that keeps an eye out for suspicious financial activity that might denote someone is attempting to defraud customers, especially among their older clientele. This team sponsors and takes to the radio waves monthly on “Scam Squad,” a segment on the Young at Heart local podcast, to share real world examples of current scams along with tips and tricks to avoid them. Teams from the bank also go to retirement homes and teach people how to avoid the ever-present fraud efforts against seniors, which includes offering cyber security classes. “We try to involve entire families in these as much as possible,” Orloff says.

Another program inspired by Towbes and later refined and carried out by the entire bank staff is Community Dividends. It is this project that perhaps best symbolizes the bank’s close partnership with the community.

“It’s a form of philanthropy based on Michael’s belief that as a commercial bank, we have a responsibility to invest in the community, making it a better place to live and work,” Garufis says. Just before Thanksgiving each year, an event is planned by the bank to bring together often more than 200 representatives of different nonprofits in the region to celebrate their work. The organizations are awarded funds ranging on average from $2,500 to $10,000. It gives everyone a chance to network and learn about what other organizations are offering in the community, and share lessons learned about challenges these organizations may be experiencing.

“The program and the annual celebration were started as a way of giving back and saying, ‘thank you’ to these organizations,” says Garufis. “Michael always said the celebration was his favorite day of the year.” This year, the luncheon is planned at the Hilton Hotel on November 22nd.

The most heartfelt event of the year for bank employees is called Anniversary Grants. The program was started as a way for bank associates to have an active voice in the giving of the organization. Every year associates nominate an organization of their choice, and they are encouraged to campaign for votes among their bank colleagues and then vote on each organization that has applied. The top 10 vote earners receive grants of about $2,200. The event creates good-natured interactions between bank associates, as they barter for their favorite charity. “Throughout the year we promote each of the ten recipients across our associate network, our branches, and the community,” Orloff says. “It allows some of the smaller charities, which might not otherwise be known, to be seen and talked about. That helps us learn and it generates more awareness and ideally donations for them.”

For bank President George Leis, the grants program is part of a work culture that prioritizes volunteering and civic engagement.

“Anniversary Grants is about our associates; they love getting involved and seeing their favorite charities get chosen,” Leis says. “Nobody is ‘required’ to volunteer; it isn’t part of their job description or anything like that, we just love to do it. The feeling you get from being able to help the community is priceless.

“We hire for culture. Our associates want to be part of the community and make a difference. It’s not just volunteerism; they really care and, in that way, they reflect our community.” That is the spirit with which today’s leadership at Montecito Bank & Trust continues to illuminate the community’s giving path.

As the largest locally owned community bank on the Central Coast, Montecito Bank & Trust remains committed to our founding principle: to make the communities we serve better places to live and work.