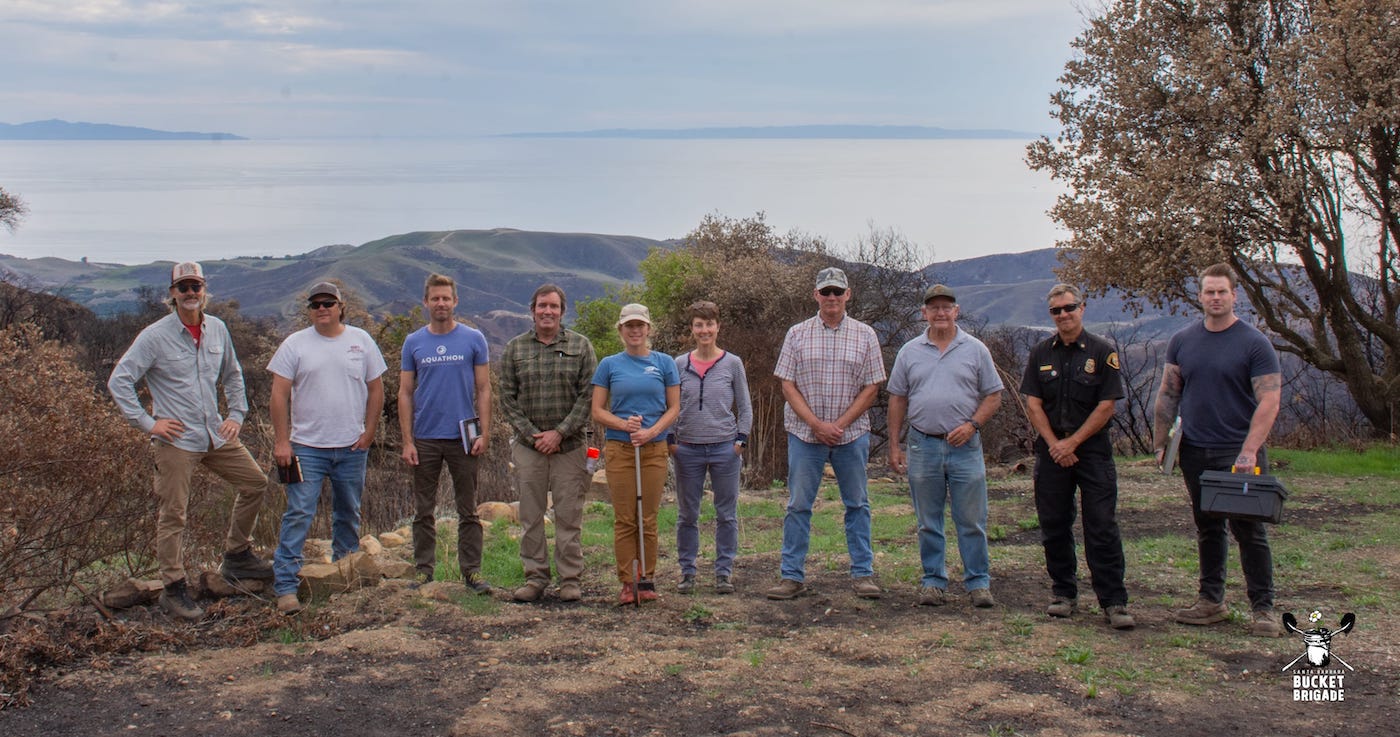 The Santa Barbara coastal region has largely escaped any major disasters in the past year, save, of course, for the ongoing crisis with COVID-19. There haven’t been any major fires striking between Carpinteria and western Goleta, and no serious flooding despite the recent record-setting string of rainstorms.

On the other hand, some folks out by Gaviota haven’t been so lucky. The Alisal Fire, that started on the afternoon of October 11, 2021, near Alisal Lake within Refugio Canyon, about 20 miles northwest of Santa Barbara, burned nearly 7,000 acres. The blaze also destroyed 13 structures, but in this new era of so-called megafires, the Alisal Fire was deemed to be too small to receive a State or Federal disaster declaration. Without that designation, the public funding, grants, loans, and other resources typically offered post-disaster to those who have been affected are not available to the survivors of the fire. To make matters worse, many of the survivors lost their insurance coverage after the Thomas Fire, then lost their homes and all of their possessions to the Alisal Fire and are suffering financial distress.

At the same time, there are toxic concerns about the ash and debris left in the wake of such a structure fire, where materials such as asbestos, heavy metals, and dioxin represent a health hazard to the property owners, their neighbors and the surrounding community. Removing the debris as quickly as possible to safeguard against wind and winter storms spreading the toxins into the creek, the local water supply and the ocean is also an urgent matter.

That situation is just the sort of thing that creates a clarion call for the Santa Barbara Bucket Brigade (SBBB), the Montecito-based nonprofit formed in early 2018 to create an organized community response in the wake of the Thomas Fire and Debris Flow. The award-winning grassroots humanitarian organization joined with Heal the Ocean, Santa Barbara Channelkeeper and other local community nonprofits to create the Alisal Fire Assistance Project (AFAP), a public fundraiser to raise the money needed to complete this cleanup work and assist the survivors and owners of the damaged structures.

Now, Bucket Brigade co-founder and CEO Abe Powell is calling on Montecito and Santa Barbara to help out their neighbors, much as the community came together to help dig out and restore Montecito following the fire and flows that destroyed many neighborhoods in the village and claimed 23 lives.

“I’m hoping that folks in Montecito will be willing to help other people after a natural disaster, much as they were helped four years ago,” Powell said earlier this week, the day after the fourth anniversary memorial that was streamed online last Sunday. “It’s important that people get involved and let them know that the community is there for them when they need us.”

SBBB itself has lent a literal helping hand from among its core of volunteers drawn from the total of more than 4,000 individuals working with the nonprofit since its founding, Powell said.

“We’ve had volunteers out there sandbagging before the recent rainstorms, and we’ve been helping to stabilize the hillside around the properties doing work on erosion control to prevent the debris from washing down into the creek. I’m going up there again tomorrow.”

The Alisal Fire Assistance Project is merely one of the ways that SBBB is still in the trenches long after the lights from the TV cameras have faded and celebrities disappeared from the work sites that were all over the news in the winter of 2018 in the aftermath of the Montecito debris flows, when teams of volunteers used shovels, bulldozers, and bare hands to remove mud from homes and search for personal effects that had washed away. In the four years that have followed, the Bucket Brigade has crystallized its mission to address the need for an organized community response to natural disasters and crises, recognizing that a cooperative community is the foundation of local resilience.

The Bucket Brigade’s work representing its ethos of volunteer training, coordination, and deployment has included Ennisbrook and Casa Dorinda trail and habitat restorations, the Safe Routes to School Trails Network that has defied Montecito’s infamous resistance to change, the “Make Masks – Save Lives” program that encompassed more than 300 volunteers sewing 40,000 cloth masks remotely to combat Covid when PPE was in short supply in 2020, and the Growing Community Project that included delivering home pandemic-proof grow-your-own-vegetable “victory garden” kits to residents throughout the county in 2021. There have been astounding improvements in local access and safety, resulting in SBBG not only winning a number of prestigious awards – from two Local Hero designations to California Nonprofit of the Year to, most recently, recognition from Google on National First Responders’ Day last October – but also served as a framework for other communities.

“Training people with the skills and tools to responsibly respond to crises and natural disasters that are continuing to increase exponentially everywhere is about moving our community from survivalism mode to one of resilience and cooperation,” said Powell. “Please either volunteer or donate – but do something for your neighbors.”

The Santa Barbara Bucket Brigade was created to prepare for and respond to natural disasters and community crises through volunteer training, coordination, and deployment.

During a crisis, the Bucket Brigade turns helplessness into helping by enabling the community to lead its own recovery effort. The inclusive, welcoming approach gives ordinary people a chance to become neighborhood heroes in a time of need. This is something every community needs right now.

You Can Help Build Resilience in Santa Barbara County

The Bucket Brigade resilience model focuses on people and community.

“The feel-good factor of volunteering is overwhelmingly powerful, especially since we are so privileged in our own lives,” says Hy Rosario, a Bucket Brigade volunteer.

“The opportunity to give is returned ten-fold and cannot be overstated.”

You can become a Bucket Brigade Member or Sponsor today by visiting sbbucketbrigade.org and clicking the red donate button. Donations can also be made by mail to P.O. Box 50640 Santa Barbara, CA 93150. Your donations help the Bucket Brigade keep the doors open and provide the safety equipment, materials, and leadership needed for year-round community action and uplift.

“Now is the time to reconnect with the Bucket Brigade community,” says Co-founder Abe Powell. “Join us as we remember what it means to be good neighbors in a time of need – not just with words, but with deeds.”